Your guide to foreign inbound investment in the Kingdom

The growth and importance of Saudi Arabia’s economy is widely recognised and it is becoming increasingly attractive to foreign investors. It is the largest economy in the Middle East, with a GDP of SAR 2.9 trillion (US$ 782 billion) in 2018, and it aims to be one of the largest economies in the world over the coming decade.

The Vision 2030 and the National Transformation Programme promise change for the Kingdom of Saudi Arabia’s economy and wider society. Central to the Vision 2030 is the diversification of Saudi Arabia’s economy, moving from a public sector-based, oil-dependent economy towards a more balanced economy with a thriving private sector. The ambition is to increase the private sector’s contribution to approximately 65 per cent. of the country’s GDP, up from its current contribution of approximately 40 per cent., with an increase in non-oil government revenue from SAR 163 billion (US$ 43 billion) to SAR 1 trillion (US$ 270 billion). Domestic private sector growth is to be boosted with a comprehensive privatisation programme driven by the National Center for Privatization & PPP (NCP) and the development of domestic industry sectors.

Saudi Arabia is increasingly integrated in the world economy, a trend which has accelerated since the country joined the World Trade Organisation in 2005. The Kingdom is investing significantly in developing international partnerships and trade links and is attracting foreign inbound investment and expertise. This is supported by a strengthening legal and regulatory framework as set out in more detail in this guide. Many of the changes in this area demonstrate Saudi Arabia’s evolution towards global commercial rules and standards. Complying with international business standards and treaties will continue to help inbound and outbound investment succeed, which is especially important in an era of cross-border regulatory scrutiny and political anxiety about foreign investments into strategic sectors.

This guide analyses how Saudi Arabia’s economy and laws are evolving to support foreign inbound investment.

The regulatory landscape in Saudi Arabia has transformed significantly in recent years, particularly in the spheres of corporate law and capital markets, providing increased legal certainty for foreign investors. We assist international clients in a range of sectors with their inbound investments into the Kingdom, and we are seeing an increasingly flexible approach by the authorities as the objectives of the Vision 2030 are realised.

With an overall investment climate that is increasingly buoyant, analysts expect the Saudi economy to grow in 2019 and beyond, supported by higher oil prices, the development of non-oil sectors and reforms to improve the investment climate and private sector growth. Over the last few years, an extensive programme of modernisation has woven aspects of international best practice into the commercial legal landscape. This landscape continues to evolve. Here are the key themes of this guide:

Following a lull in inbound M&A activity, analysts expect Saudi Arabia to be the centre of cross-border activity in the region going forwards, as economic reform and the recent inclusion of Saudi Arabia in MSCI’s Emerging Markets Index stimulate investment.

Saudi Arabia’s foreign investment regime is one of the most formalised and transparent in the Middle East. The Kingdom’s economy and laws continue to evolve to support foreign inbound investment. Across all sectors, inbound M&A into Saudi Arabia reached US$ 8.3 billion in 2018.

What do foreign investors need to know?

The first step in assessing the viability of an investment in Saudi Arabia is to determine whether the industry in question is open to foreign investment. If it is, then the following issues need to be considered:

Saudi Arabia’s plan to reform its state-owned enterprises is a central part of restructuring the domestic economy. The NCP is enabling the privatisation of a range of important sectors. There should also be more targeted opportunities for M&A transactions and investment in initial public offerings (IPOs). Looking ahead, the Kingdom is looking to transform Saudi Aramco, the state oil producer, into a global industrial conglomerate through an IPO and this is expected to occur by 2020.

The Saudi Arabian General Investment Authority has recently made changes to its licensing procedures, in an effort to modernise the application process, in turn making the process of investing in Saudi Arabia much easier and more transparent.

Investing in Saudi Arabia: Your guide to foreign inbound investment in the Kingdom 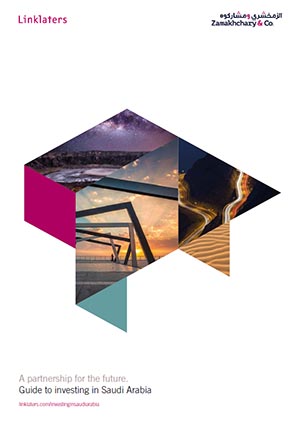 Created in conjunction with Zamakhchary & Co.