Indian Law: Year in Review 2020 and Year to Come 2021 summarises some of the major developments in India last year, and a selection of key changes that we anticipate over the coming year.

A broad range of regulatory updates were made in India in 2020 in a number of key sectors. Our review aims to give you an overview of the most significant changes and looks ahead at what 2021 may bring.

Explore our overview of key developments below.

Significant legal and regulatory events in 2020

2020 was largely a year of continued liberalisation of the Indian legal and regulatory regime. However, there is uncertainty as to whether some of the changes are merely Covid-19 related or will continue in the longer term.

Foreign Investment – China restriction: Since the 1990s, India has been liberalising its foreign investment regulations. However, in 2020 there was an instance of new restrictions being imposed on foreign investment, though in this case India appears to be following the example of leading western economies who have made similar moves.

In April 2020, the Indian government announced a targeted restriction on what it termed “opportunistic takeovers/acquisitions” of Indian companies during the Covid-19 pandemic. The new restriction requires prior Indian government approval for any investment into India by an entity that is located in a country which shares a land border with India (i.e. Bangladesh, Bhutan, China, Myanmar, Nepal and Pakistan) or where the beneficial owner of such investment is located in such country. Further, any change in control of a company that has an existing investment in India, where the beneficial ownership as a result of a transaction would be held by an entity located in such a restricted country, would also require prior approval of the Indian government. The term beneficial owner/ownership is undefined and, as a result, the exact scope of the restriction is ambiguous. However, since investments into India from Pakistan and Bangladesh are already subject to restrictions, this move is largely believed to target Chinese investment/ acquisitions in India. It is also unclear if the restriction will be withdrawn after the pandemic.

Decriminalising offences under the Companies Act: The Companies Amendment Act 2020 has removed a number of offences dealing with non-compliance of various provisions of the Indian Companies Act including:

The exemption applies to all dividends, interest and capital gains arising from investments in India made by Sovereign Wealth Funds and Pension Funds.

The exemption applies to investments made after 1 April 2020 but prior to 31 March 2024 and must be held for a minimum period of three years.

To benefit from the exemption:

Bilateral Investment Treaty (BIT) Vodafone Decision: Vodafone won its BITs arbitration at the Permanent Court of Arbitration at The Hague against the Indian government in its long running tax dispute.

Vodafone acquired CGP Investments (Holdings) Limited (CGP), a Cayman entity from another Cayman entity, Hutchison Telecommunications International Limited (Hutchison). CGP through its subsidiaries held the majority stake in Hutchison Essar Limited (HEL), an Indian company. The Indian tax authorities held the transaction was liable to capital gains tax in India and ruled that Vodafone was in breach of not fulfilling its withholding tax obligation.

On being challenged in the Indian courts, the Supreme Court of India (SC) ruled in favour of Vodafone and held that the consideration paid by Vodafone to Hutchison was not liable to tax in India.

However, the Indian government passed a retrospective clarificatory amendment to the Indian tax legislation which made certain indirect transfers taxable in India. Vodafone initiated arbitration against India under the Bilateral Investment Treaty between India and the Netherlands.

The arbitral tribunal held that India breached Article 4 (1) of the BIT Agreement, which states that investors of each country must be accorded fair and equitable treatment and enjoy full protection and security in the territory of the other party, at all times. India’s conduct in imposing the tax liability retrospectively on Vodafone, along with interest thereon and penalties, notwithstanding the 2012 Supreme Court decision, was held to have fallen foul of its obligation under Article 4(1) of the Agreement.

The award further holds that India is required to cease the conduct in question.

The Indian government has issued a statement acknowledging the award and indicated that a future course of action including legal remedies before appropriate fora is being considered.

OSP Regulations: The Indian government exempted non-voice BPOs (i.e. all data service providers) from the purview of the Other Service Provider (OSP) regulations within the broader telecom regulations.

In any event all OSPs are no longer required to register themselves with the Indian telecom department and a number of onerous regulations applicable to OSPs such as restrictions on working from home and information requirements on location of computers connected to the telecom grid have been removed.

This liberalisation is expected to remove a significant regulatory burden on such OSP businesses and is significant progress in the Indian government’s promise of increasing the ease of doing business in India.

Insolvency Suspension: In response to the negative impact of Covid-19 on the economy, in line with other major economies, the Government of India in June 2020 suspended the initiation of fresh insolvency proceedings under the Indian Insolvency and Bankruptcy Code, 2016 (the “IBC”) against debtors for a period of six months for defaults arising on or after 25 March 2020. The six-month suspension period was extended by a further three months in September 2020. The suspension applies to Sections 7, 9 and 10 of the IBC. This means no fresh insolvency filings can be made by financial creditors, operational creditors, or the corporate debtor for defaults on debt service or repayment during the suspension period. This was a much-needed relief for a slew of corporate creditors but the challenge will be to ensure they are in a position to meet their financial commitments once the suspension period ends. Whether the nine-month suspension period will be further extended remains to be seen though the December 2020 timeframe ties in with the Reserve Bank of India’s Resolution Framework for Covid-19 Related Stress issued in August 2020. Under this Special Framework, debtors and creditors have until 31 December 2020 to invoke the consensual resolution process and reach an agreement to proceed with a resolution plan. This route can give borrowers a two-year repayment moratorium without affecting the asset classification of the loans as standard in the creditors’ books.
Corporate
Dispute Resolution
TMT
Banking

Significant legal and regulatory events in 2021

2021 is likely to see the implementation of the Personal Data Protection Bill and the potential relaxation of some of the Covid-19 specific regulations that have been introduced.

Read here for detailed information about the PDP Bill and its focus on personal data.

The PDP Bill is now being reviewed by a joint parliamentary committee (“JPC”) which is understood to favour moving away from the PDP Bill’s focus on personal data to a broader regime on overall data protection including non-personal and sensitive data with greater emphasis on data localisation and digitisation.

The JPC has expressed concerns around a lack of data localisation since it is believed that much Indian data is stored outside India and there is very little Indian control over such data. This has been an area of major concern in relation to social media platforms that store data outside India with such data not being easy to retrieve for investigations.

The report of the JPC is expected to be submitted before the winter session of Parliament and a new version of the PDP Bill is expected in 2021.

Banking License for Corporates: The Reserve Bank of India working group on “Ownership Guidelines and Corporate Structures for Indian Private Sector Banks in India” published its report in 2020 which makes a number of recommendations on shareholding in banks, eligibility criteria for setting up new banks (including by corporates), minimum initial capital requirements and stock exchange listings. The proposal to lift the restrictions on corporates from obtaining banking licenses is particularly controversial and new regulations implementing some or all of the recommendations of the working group are expected in 2021.

As a result of the recognition of investment committees, there is now a lack of clarity on how an Indian AIF which has an investment committee comprised primarily of non-Indian members will be dealt with under the Indian foreign investment regulations. SEBI is awaiting clarifications from the Indian government and Reserve Bank of India on this issue and it is expected that an amendment will be issued addressing this issue in 2021.

However, until that time SEBI has put on hold approvals of applications of AIFs whose investment committees consist of non-Indian members. 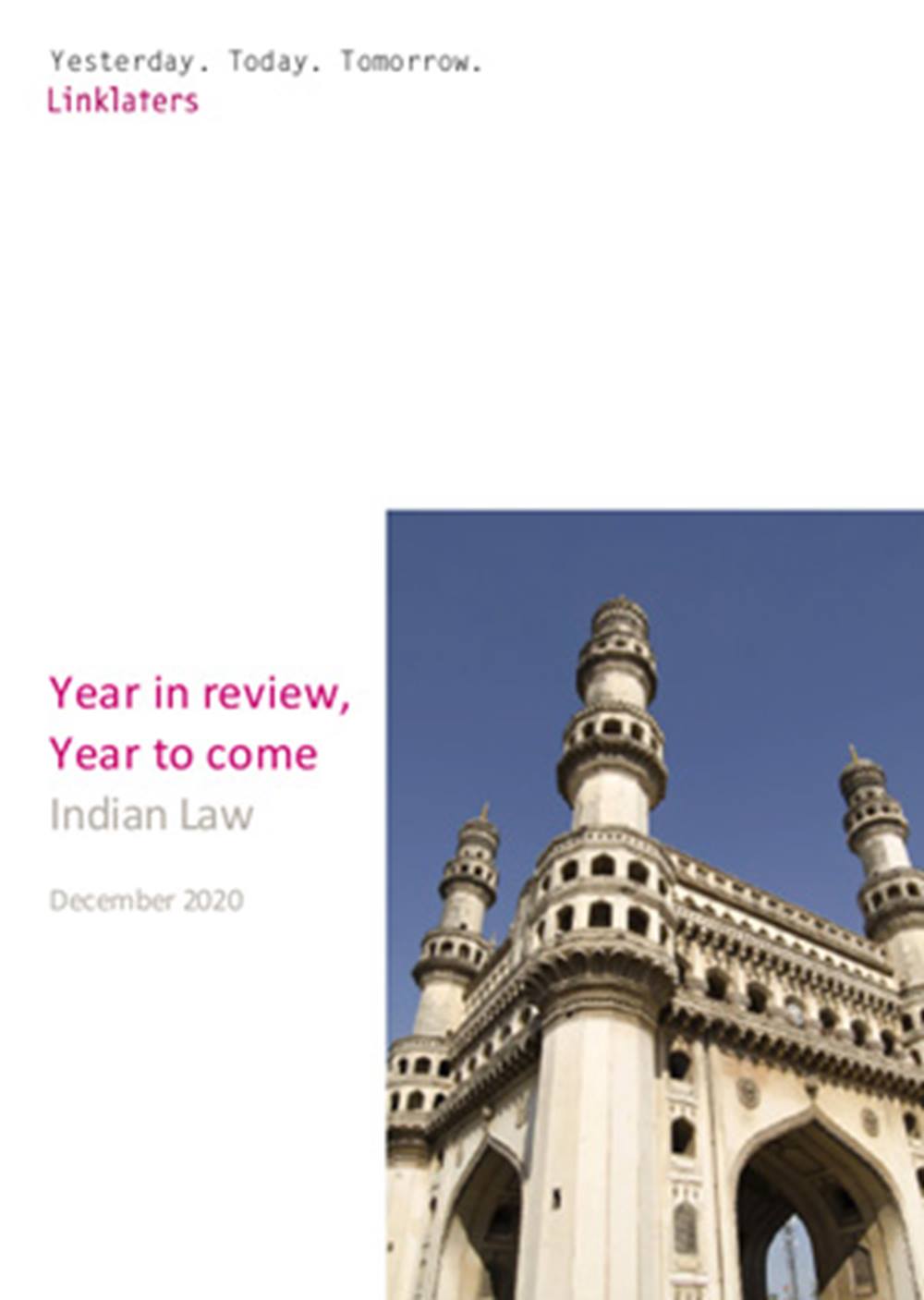 Key contacts for India
For more information, please speak to one of the key contacts below

Explore our Year in Review 2020 and Year to Come 2021 series across 20+ jurisdictions and a number of topics.

Explore the series
x The world in 2022