Key issues for funds and investors

This overview outlines some of the high level key issues which may be relevant to an investor considering investing in infrastructure assets in Thailand.

Key Issues for you to consider

The Thai Government has generally allowed foreign investment, but on a controlled basis. Foreign share ownership levels are restricted in certain sectors (e.g. land, telecommunications and transport) by the Foreign Business Act 1999 (the “FBA”). For example, at least 50% of the total issued shares of a company engaging in the land transport industry must be held by Thai investors. In addition, under the Land Code, a company may not own land in Thailand if more than 49% of its total issued shares are held by a foreigner or foreign company or a company with a majority (in number) of shareholders being foreigners or foreign companies.

Exceptions to the foreign share ownership and land ownership restrictions may be granted on a case by case basis. In practice, foreign companies may structure their investments so as to retain control over them in Thailand.

Thai foreign exchange controls are administered by the Bank of Thailand (the “BOT”) on behalf of the Ministry of Finance, pursuant to the Exchange Control Act 1942, as amended. The BOT has granted commercial banks and certain other entities certain levels of authority to conduct foreign exchange transactions as authorised agents of the BOT.

Inward remittance of money into Thailand for investment in securities does not require registration with the exchange control authorities. Any person in Thailand (regardless of whether such person has a domicile/residence in Thailand) who wishes to make any payment or remit money either in Baht or foreign currency outside of Thailand will need to obtain approval from the BOT, except where such payment or remittance is made in connection with certain pre-approved transactions, such as payment for goods and services, transfer of proceeds from sale of shares, payment of principal and interest under loan agreements to offshore lenders. For the “pre-approved” payment or remittance, the BOT’s approval is not required and the payment or remittance can be made through any authorised commercial bank with certain supporting evidence.

3. What is the legal position regarding enforcement/resolution of contractual and other disputes?

Enforcement or resolution of contractual and other disputes in Thailand would normally be taken to the competent court. The parties can also agree in advance to enforce or resolve their commercial disputes by arbitration.

Pursuant to the Arbitration Act 2002 and the New York Convention to which Thailand is a party, if a party refuses to comply with an arbitral award (including foreign arbitral awards), the other party can file a request with a competent court in Thailand for a judgment enforcing the award within 3 years from the date on which the parties receive a copy of the award. In practice, the Thai court will render the judgment enforcing the award with immediate enforcement effect, unless the party against whom the award is rendered has challenged the request on certain prescribed grounds.

4. Are there any legal or regulatory trends, including anticipated changes in the law or enforcement of existing laws, which may be relevant to a foreign investor?

In order to facilitate foreign investment, the Department of Business Development is, according to the news, said to be preparing to exclude certain service businesses (i.e. lending to an affiliate in the country, the lease of office buildings to an affiliate and the provision of management, marketing, human resources and information technology consulting services to an affiliate) from being subject to restrictions and the requirement for approval under the FBA. However, at this stage, there is no official draft of the regulation on such exemption or exclusion from the government.

Besides the FBA, the Eastern Special Development Zone Act 2018 (the “EEC Act”) was enacted with an intent to promote the use of land in the Eastern Region of Thailand referred to as the Eastern Economic Corridor (“EEC”) for continuous and synchronised integration of the civil infrastructure and public utilities considering the true nature and potential of such land. The EEC Act (i) allows foreigners under the Land Code to own land for their licensed business in the EEC without having to obtain a license under the Land Code and (ii) exempts them from the restrictions imposed by the law governing condominium ownership, to the extent they operate a business promoted under the EEC Act (which includes infrastructure). The EEC Act also increases the maximum lease term in leasing or subleasing of land or real properties in the EEC for the purposes of the development and promotion of special targeted industries (which include infrastructure).

5. Are there any governance or corruption concerns that are relevant to a foreign investor?

6. Any other legal or regulatory issues which are relevant to a foreign investor?

The main purpose for the promulgation of the 2019 Act is to have a clear and certain state policy in arranging infrastructure and public services by aiming for public private joint investment on the basis of PPP, and to determine mechanisms for efficiently solving problems, obstacles or delays in undertaking the PPP projects. Whilst the 2019 Act retains certain basic concepts and procedures for private investments as in the 2013 Act, the 2019 Act narrows down the scope of the PPPs to basic infrastructure projects and public services.

Under the 2019 Act, the private investor may not always be selected through bidding. In general, the selection of a private entity shall be made by bidding, unless the Cabinet has approved other selection methods.

7. Are there any non-legal/non-regulatory sector-specific risks that may be relevant to a foreign investor?

No material issues to be considered.

8. Investment trends and opportunities which may be of interest to a foreign investor

Following the government’s initiation and promotion of “Thailand 4.0” in 2016, which is an economic model aiming to unlock the country from several economic challenges and to escape the middle-income trap by promoting advanced manufacturing and high-value services, the government has launched an infrastructure development plan focusing on promoting PPPs (as an alternative source of funding to meet the infrastructure funding gap) for large infrastructure projects including railway, airport and port upgrades, highspeed rail, expansion of roadways and sky train routes and the development of the EEC.

These large infrastructure projects include the 193.5-kilometre Bangkok-Rayong highspeed rail to link the Suvarnabhumi, Don Mueang and U-tapao international airports, the phase 3 development of Laem Chabang port and the U-tapao airport upgrade, all of which are now under bidding processes and preparations for PPP. Another significant infrastructure project is the phase 1 Thai-Chinese high-speed railway to link Bangkok to Nakhon Ratchasima which, according to the news, is under discussion between the governments of the two countries to reach agreement on the designs and construction plan. The project is expected to open for bidding in early 2019.

Therefore, there are several new projects and ongoing opportunities in 2019, which may well continue into the future.

Select a jurisdiction on the map to explore in more detail

Our Infrastructure and Energy teams in offer our clients unrivalled global coverage.

This unique offering means that our clients can come to us for expert advice across the full life-cycle of an asset, something that the majority of our competitors simply cannot offer.

Use the links to find out more about our Infrastructure and Energy expertise, as well as our Asia specific credentials.

Linklaters is recognised as a leading firm in the infrastructure market. We believe that we are exceptionally well placed to assist both sponsors and financial institutions alike in this market because we have in-depth sector expertise and the capability to harness our leading acquisition practice with the leading finance team.

Read more about our Infrastrucutre and Transport sector offering

We have a huge amount of experience advising on infrastructure and energy matters across Asia. To download an overview, please click here or on the image below: 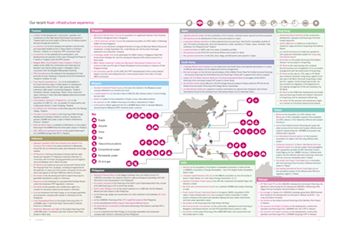 Key Contacts
For further information, please contact one of our Asia Infrastructure network below

The Clean Energy for all Europeans Package has been a long-time coming. First proposed in November 2016, it was heavily negotiated by the Council of the European Union, the European Parliament and the European Commission (“Commission”).

Trends and developments in the automotive sector

We have collated insights from our team on key trends in the automotive sector.

Find out more Trends and developments in the automotive sector

Powering the future: Commercial opportunities and legal developments across the EV batteries lifecycle

The advent of electric vehicles (EVs) is one of the most revolutionary changes to take place in the history of transport. This microsite contains key insights on the commercial opportunities and legal developments in relation to electric vehicle batteries.

Find out more Powering the future: Commercial opportunities and legal developments across the EV batteries lifecycle

A vast array of stakeholders: automotive businesses, technology companies, governments, regulators, journalists, infrastructure providers, and many many others as well as consumers themselves – will need to work together in order to unlock the potential of the car of the future.

Find out more FT Future of the Car Summit 2019 summary

The advent of driverless cars promises a fundamental transformation of the way we transport people and goods, how we spend time, and how we organise cities, landscapes and economic infrastructure.