Its introduction was delayed by the March 2020 Budget, but HMRC’s status as a "secondary" preferential creditor for certain amounts will now take effect from 1 December 2020.

HMRC lost its Crown Preference status in the early 2000s as part of the Enterprise Act reforms and the partial re-introduction of its preferential status has been criticised by many in the lending and restructuring and insolvency community as something of a backwards step.

However, the Finance Act 2020 received Royal Assent in July 2020 and it provides that HMRC will be a secondary preferential creditor. Recently, the Government published the Insolvency Act 1986 (HMRC Debts: Priority on Insolvency) Regulations 2020. These confirm that, in addition to unpaid VAT, HMRC will also be a secondary preferential creditor in respect of the following:

However, the Finance Act (unlike the earlier draft Bill published in July 2019) allows the Government to make regulations limiting the secondary preferential debts to VAT referable, or to deductions made in, a specified period. At the time of writing, no such regulations have been made.
As a secondary preferential creditor, HMRC will rank behind ordinary preferential creditors (mostly certain employee-related claims) but ahead of floating (not fixed) charge holders, as shown in the diagram below. This also takes into account the new category of pre-moratorium and moratorium debts. 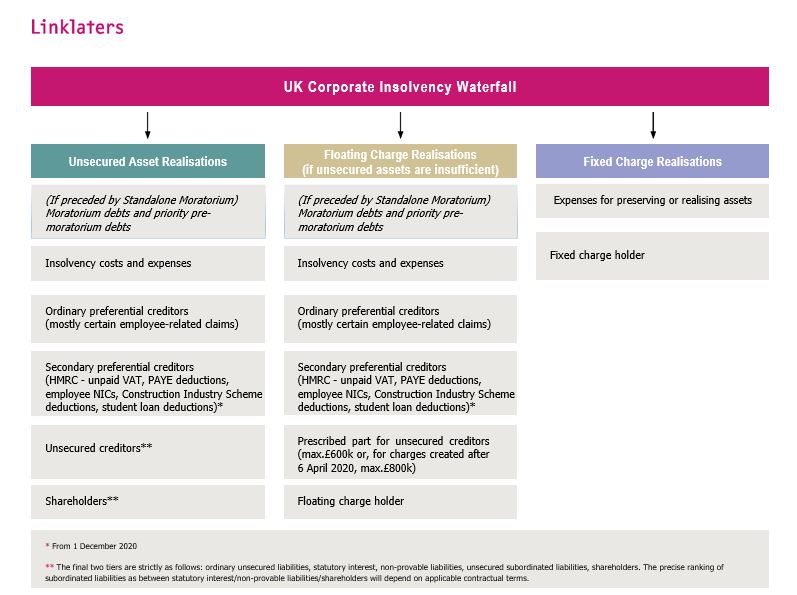