One of the fastest-growing sub-sectors of non-core infrastructure

In recent years, increasing deal pressures in the core infrastructure market – record available capital, new market entrants, higher valuations and reduced rates of return allowed by regulators – have encouraged some investors to look at higher-yielding non-core investments. These investments now account for over half of deal value in the European market.

The rise of renewables

Investors have shown strong interest in specific new sub-sectors – including fibre, data storage and smart metering assets – which have emerged as a result of technological developments. However, car parks, hydro power and renewables have been amongst the fastest-growing non-core sub-sectors in recent years.

The growth of renewables deals has been almost three-fold since 2012: 270 deals in 2017 compared to 102 in 2012. Increased activity here has largely been driven by changes to regulation in the energy sector.

Number of European infrastructure deals over time, by sector 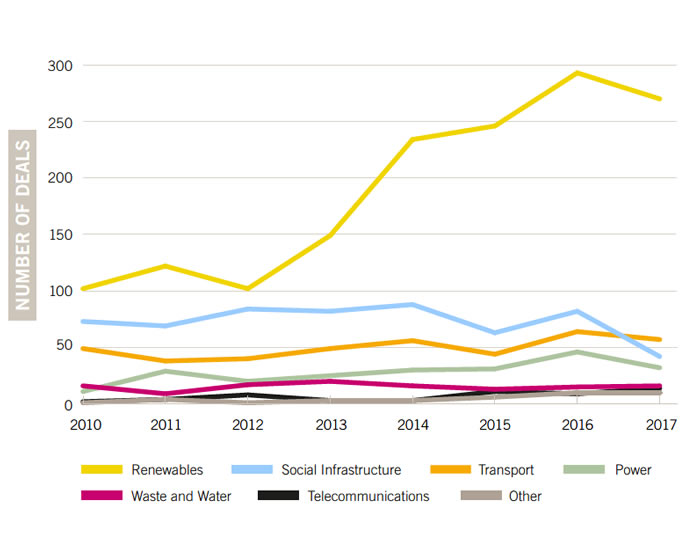 
As Figure 1 illustrates, renewable energy transactions made up the lion’s share of infrastructure investments in recent years. In part, this has been driven by attempts to decarbonise the power sector to meet 2020 targets under the Renewable Energy Directive.

The EU’s Third Energy Package, which required the unbundling of assets and has created new challenges financing investments with restricted balance sheets, has also led to a number of traditional players in the energy sector restructuring their portfolio, such as E.ON’s spin off of Uniper.

Oil majors have similarly sought to restructure their portfolios in recent years following a significant fall in oil prices. Mid-stream assets, such as pipelines and terminals, have been popular choices for carve-outs and divestments. They are often snapped up by infrastructure investors recognising the stable demand for these assets and limited exposure to the volatility of underlying oil prices.