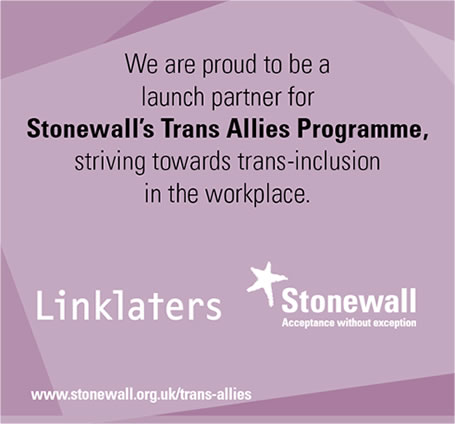 Linklaters has joined a diverse range of organisations as launch partner for a new programme to create better allies for trans people by Stonewall. In pledging support, the firm is demonstrating its commitment to bringing positive change in workplaces and communities for all trans and non-binary people.

As a launch partner, Linklaters will be leading the way in delivering an innovative one-day programme in-house. The trans allies programme will help non-trans people understand how they can tackle anti-trans discrimination and ‘come out’ in support of trans people everywhere as allies. They will receive a deeper understanding of the impact of transphobia, along with the tools and language to better include trans people at work and in their everyday lives. The final programme will be open to any individual from any industry in any role who is committed to trans equality.

Linklaters’ pledge to improve trans inclusion comes at a time when trans and non-binary people face alarming levels of discrimination at work and in society. Earlier this year Stonewall released research that showed half of trans people (51 per cent) have hidden their identity at work for fear of discrimination or abuse. Moreover, one in eight trans employees (12 per cent) have been physically attacked by colleagues or customers in the past year.

“It’s crucial that everyone at Linklaters treats one another, our friends and our clients, with dignity and respect. These are core values of the firm. As Firmwide Managing Partner, and Champion for LGBT on the firm’s Executive Committee, I want to lead by example, and show my commitment to inclusion at the firm, so I’m both delighted and honoured that Linklaters has been named one of Stonewall’s inaugural Trans Allies.”

‘We’re proud to have the support of Linklaters to help launch our trans allies programme. Their commitment to moving forward in their journey to get trans inclusion right is a sign that a positive future is possible.’

‘We know trans and non-binary people face abuse and discrimination in their day-to-day lives. Half of trans and non-binary people have hidden their identity at work for fear of discrimination. However, having leading organisations including Linklaters’ backing our trans allies programme shows there is strong support for trans people across different sectors. We are looking forward to building on this extremely positive to create more inclusive workplaces across Britain.’

Linklaters’ inclusion in Stonewall’s Trans Allies initiative builds on the firm’s LGBT Ally programme, which was launched in 2014.