The Crown regains preferential treatment – how will English sports clubs be affected?

The UK’s tax authority, Her Majesty’s Revenue and Customs (HMRC), now holds secondary preferential creditor status in seeking to recover certain taxes upon any UK company entering into insolvency. The nature of the UK legal architecture means that England and Wales, Scotland and Northern Ireland are different legal jurisdictions governed by a different combination of insolvency laws and regulations. This article focusses on the impact of this tax reform on English law and English professional sports clubs: specifically on those that enter insolvency but also on the ability of clubs to obtain credit during the ordinary course of business.

Crown Preference is (partially) back

English companies collect certain taxes from their employees, customers and counterparties and these are periodically paid across to HMRC. These include Value Added Tax (VAT), Pay-As-You-Earn Income Tax (PAYE) and employee National Insurance contributions (together, collected taxes). English companies are also liable to HMRC for their own taxes, such as corporation tax (based on profits in a given tax year) and employer National Insurance contributions (together, assessed taxes). HMRC is a creditor of each English company in respect of any unpaid collected taxes and assessed taxes.

As shown in the diagram below, distributions to the creditors of an insolvent English company are subject to a hierarchy determined by law. The Finance Act 2020 introduced secondary preferential creditor status (sometimes referred to as Crown Preference status) for HMRC, effective 1st December 2020. HMRC was previously an unsecured creditor in relation to both collected taxes and assessed taxes. HMRC now ranks ahead of some other creditors in relation to collected taxes, which will now be payable ahead of floating charge creditors and unsecured creditors (although still behind ordinary preferential creditors, such as certain employee-related claims). However, HMRC remains at the back of the queue as an unsecured creditor in relation to assessed taxes. 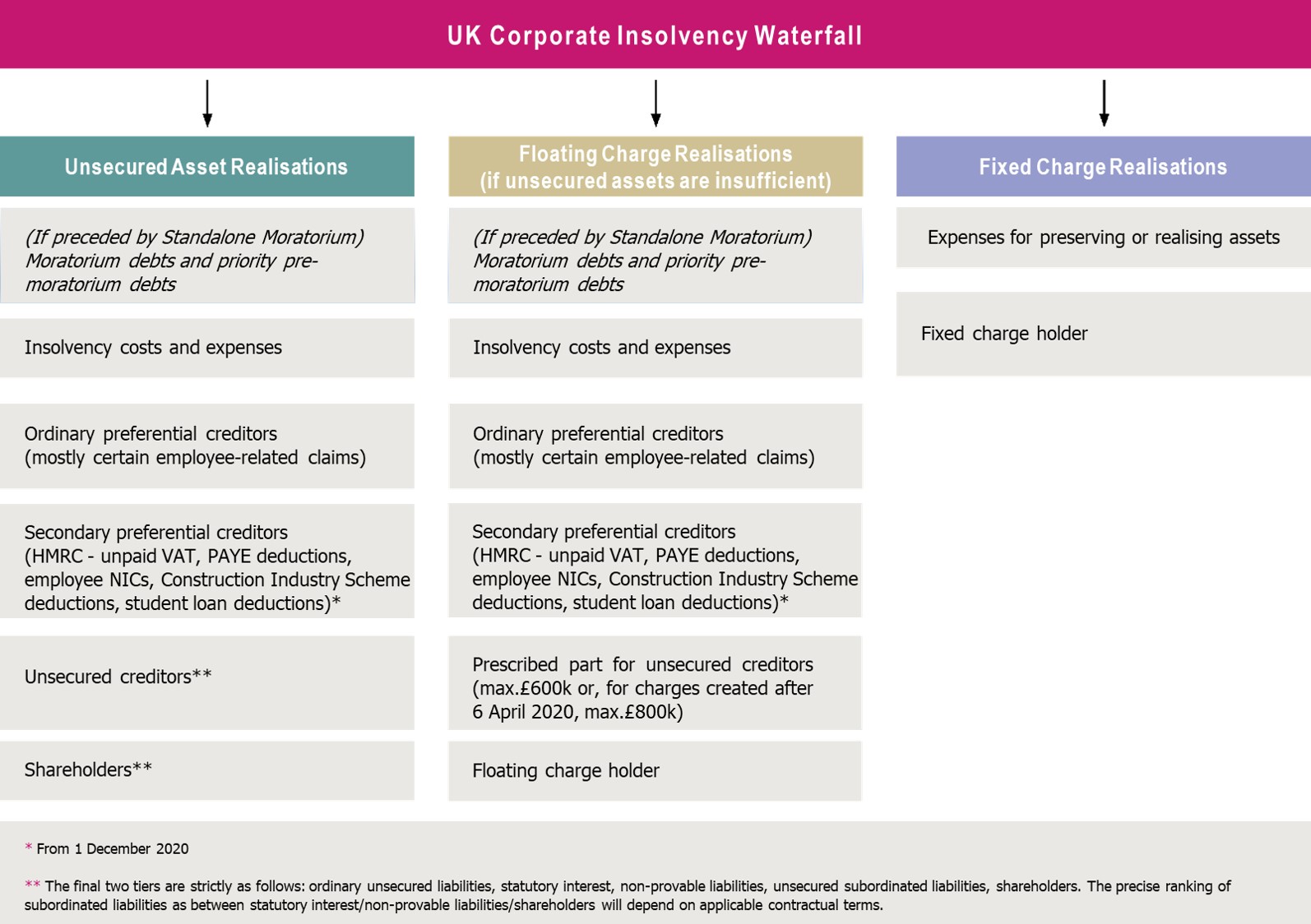 When English Football League (EFL) clubs find themselves in the High Court facing threat of liquidation, it is typically due to a winding-up petition issued by HMRC for unpaid taxes. Such a petition is typically met with numerous court adjournments to allow clubs additional time to settle their debts. HMRC issued its petition against Macclesfield Town in January 2019, who were relegated from the EFL at the end of the 2019-2020 season, and the club was wound up in September 2020 with £190,000 in unpaid taxes out of total debts of about £500,000. Southend United has faced a number of winding-up petitions issued by HMRC in recent years, with a debt of almost £500,000 to HMRC being cleared in October 2020.

The UK Government has restricted the issue of winding-up petitions as part of its Covid-19 support measures. A creditor must demonstrate that they have reasonable grounds to believe that the insolvency of the company would have arisen even if Covid-19 had not had a financial effect on the company. However, such respite shall eventually come to an end. It remains to be seen whether HMRC may take a more relaxed stance in pursuing unpaid debts or assessing a proposed debt restructuring, such as a company voluntary arrangement (CVA) between a company and its unsecured creditors, due to its preferential status.

A disincentive to lend

The Crown (then represented by the UK’s tax authorities, the Inland Revenue and Her Majesty's Customs and Excise) previously held preferential status in relation to both collected taxes and assessed taxes until its repeal in the Enterprise Act 2002. Back then, the Labour Government were persuaded that forgoing tax receipts is “more equitable” and “a step which will bring major benefits to trade and other unsecured creditors, including small businesses”. The current UK Government has considered these criticisms but determined that the benefits – including an estimated extra £185 million in tax receipts each year – outweigh the costs. While this conclusion may prove to be accurate in aggregate, it can still impact on businesses at the margins.

If, in addition to the increase in the “prescribed part”, lenders expect their recoveries to be materially reduced by HMRC’s preferential status, they may insist upon a higher interest rate to compensate for that additional risk or additional assets to be subject to fixed charges as security. Lenders may also refuse to lend to certain businesses perceived as too high-risk because they rely too heavily on cash flow generated by taxes collected on behalf of HMRC.

Unsecured creditors will include any counterparties (typically small- and medium-sized enterprises) that have supplied goods or services in advance of payment and any customers that have paid prior to receipt of their goods or services.

These challenges have made suppliers materially more vulnerable to customers that fall into insolvency with unpaid bills. Suppliers can then be expected to tighten their credit terms in response to this greater credit risk offered by a prospective customer.

Unfortunately for many professional sports clubs, in particular football clubs in the EFL, they fall within this category of having HMRC as a significant creditor. The salaries of players and coaching staff represent the majority of clubs’ operating costs and lead to substantial PAYE collections. (EFL Championship clubs averaged 107% of revenue going towards “wage costs” in the 2018-2019 season, according to Deloitte.) Together with VAT receipts generated from their day-to-day business, the average professional sports club can expect to collect substantial amounts on behalf of HMRC relative to its overall revenues and profits. This has already been highlighted in the financial support offered to the EFL by the English Premier League. EFL Championship clubs will receive support to the extent that they have unpaid PAYE liabilities. As many as 20 of the 72 EFL clubs were reported to have stopped paying PAYE to HMRC by December 2020. As the UK Government has long feared, collected taxes owed to HMRC do appear to continue to operate as a sinking fund for financially distressed businesses to maintain cash in their business.

However, at a time when professional sports clubs are searching for additional liquidity to survive the absence of fans from their stadium during the Covid-19 pandemic, this tax reform will make it materially more difficult to convince their bank or key supplier to extend favourable credit terms. This change to the insolvency status of one of its largest creditors will be of significant interest to English professional sports clubs and will have a lasting impact beyond the immediate implications of Covid-19 on club finances.

Sign up to SportingLinks for more dedicated legal opinion on topical issues in the sports sector.