How often are arbitration awards set aside? Analysis of Polish case law shows that they rarely are

Setting aside procedure in Poland

When deciding on the seat of arbitration, parties are increasingly interested in the how an award might be set aside and especially on the grounds for the award to be potentially set aside. So how does this procedure operate in Poland?

Under Polish law, the grounds for an arbitral award to be set aside generally follow the grounds specified in the UNCITRAL Model Law, albeit with slight differences in wording. In addition, there are also further grounds typical for the Polish system (generally not known in other systems). Namely, the arbitral award is set aside if a final and non-revisable court judgment has been issued in the same matter or if the award was obtained by means of an offence or on the basis of a forged or altered document.

What are the numbers?

The Polish Ministry of Justice has published statistics on the setting aside procedure are available for the period of 2016-2020. These show that only c. 7.24% of Polish awards are set aside, but do not go into  the reasons why arbitration awards were set aside. However, the answers to those questions can be found in a recent survey conducted by Maria Labno, Senior Associate in Linklaters’ Warsaw office. In order to verify the grounds under which arbitral awards were set aside the survey covered more than 250 judgments issued over the last 15 years (since the introduction of substantial amendments to the Polish arbitration rules). The collected data allowed for a general assessment to be made, although it proved impossible to discover details of more cases and to precisely determine the number of cases examined in the analysed period.

Maria’s survey looked at cases in which Polish common courts (essentially civil courts, not including the Polish Supreme Court) set aside arbitral awards. The most common ground for arbitral awards to be set aside proved to be a violation of  public policy (that was the case for 57% of the awards). The second most common ground was failure to comply with requirements regarding the composition of the arbitral court and basic principles of proceedings before that court (24% of recorded cases). The third most frequent basis was a defectiveness of the arbitration clause (the arbitration agreement was invalid, unenforceable or no longer effective in accordance with applicable law) - 14% of arbitral awards were set aside on this basis 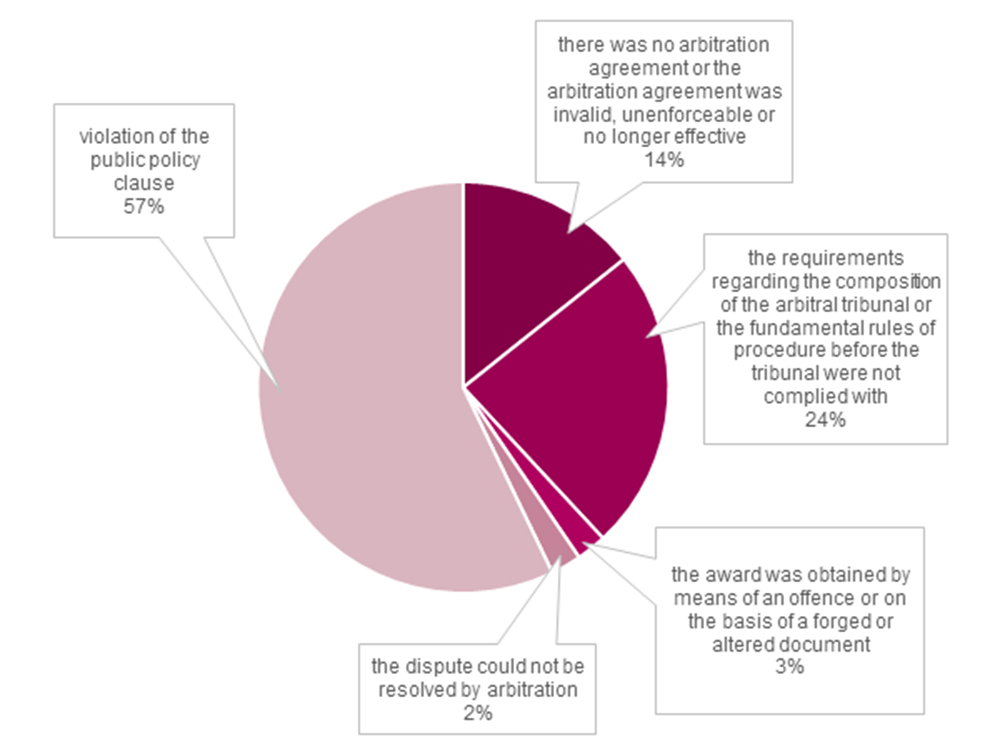 Of the judgments reviewed in Maria’s survey, a  total number of 17% of the awards were set aside. This contrasts with the 7.24% indicated by the Ministry of Justice’s statistics, and is likely to be an overestimate resulting from the use of a smaller sample size than that available to the Ministry of Justice.

A few remarks on the violation of the public policy clause

A violation of the public policy clause occurs when an arbitral award is contrary to the fundamental principles of the Polish legal order. As it was the most common ground for awards to be set aside, it is worth noting that common courts have considered the following as falling into its scope: