Linklaters in agreement with Zamakhchary & Co opened its Saudi presence in October 2017 and has had an established Saudi focused practice for over a decade. We have advised on some of the most ground-breaking transactions in the Kingdom to date.

Linklaters and Zamakhchary & Co work together through a formal agreement, as is the practice for all international law firms operating in Saudi Arabia. As part of our arrangements, Linklaters lawyers are based in Zamakhchary & Co’s offices in Riyadh. Our presence in Saudi Arabia is led by Omar El Sayed (Head of Banking and Finance, Saudi Arabia). Our global approach, and both firms' commitment to excellence and in-depth understanding of the legal and commercial landscape of Saudi Arabia mean that we have established a leading position for delivering complex and innovative advice which has helped our clients successfully pursue opportunities, realise investments and manage risk in Saudi Arabia.

We are acknowledged as a market leader for corporate/M&A, capital markets, banking, project finance, Islamic finance and international arbitration matters. Our offices also have dedicated sector specialists in the energy, infrastructure, petrochemicals, financial institutions, financial sponsor and telecommunications sectors. The firm’s track record includes acting on some of the most significant and innovative deals, as well as some of the most high-profile disputes that the region has seen in recent years. 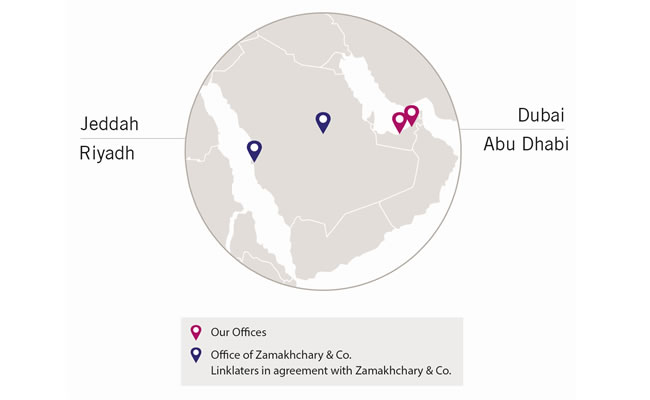 We are one of the few firms in the region capable of advising on leading cross-border transactions, and our clients regularly instruct us on their most complex deals.

We continue to advise on some of the largest and most high-profile deals in the Saudi market, but what we are truly proud of is our ability to take on some of the most structurally complex projects and coming up with innovative solutions to help our clients achieve their strategic objectives.

As the deals are becoming more complex in the Kingdom, driven both by the diversification of projects and greater sophistication of financing methods, clients are increasingly looking to us as one of the pre-eminent firms for intricate financial models, to assist them with their most important and challenging matters.

We are known as one of the leading law firms within the Saudi PPP space, having been involved in the first major successful PPP in the Kingdom, the Madinah Airport PPP Project and we are currently advising on a number of the PPPs in Saudi Arabia. Additionally, it should be noted that we are also involved in the majority of the I(W)PPs in the Kingdom.

Highlights of our experience in Saudi includes advising: