The risk of Core and non-core infrastructure

Rising demand for infrastructure assets might have been expected to simply lead to higher valuations across the board. However, the reality is that infrastructure assets offer different risk-adjusted rates of return and investors have varying appetites for risk, investment horizons, and abilities to execute deals.

It is generally accepted that non-core (core+ and core++) assets require more careful consideration of the risks – particularly downside risks – that they are exposed to, and require deeper understanding of the businesses and markets involved. Non-core are not for everyone.

Both core and non-core infrastructure have various risk criteria which investors may wish to consider, including:


Whilst investments in core regulated sectors are likely to face higher political and regulatory risks than non-core sectors, they also experience lower commercial and delivery risks. However, different sectors in different countries are exposed to these risks in varying ways. Different risk categories may also be more important for certain asset categories. However, it is generally accepted and noted by several of our interviewees that non-core investments typically demand a deeper understanding of the businesses and markets involved versus core investments.

We have assessed these sectors against the five identified risk criteria – regulatory, political, financial, delivery and commercial – for five countries (France, Germany, Italy, Spain, UK). Our analysis of the five risk criteria suggests an overall relative risk level, which is charted on the vertical axis.

Wide dispersion of risk levels for core investment, yet convergence for non-core 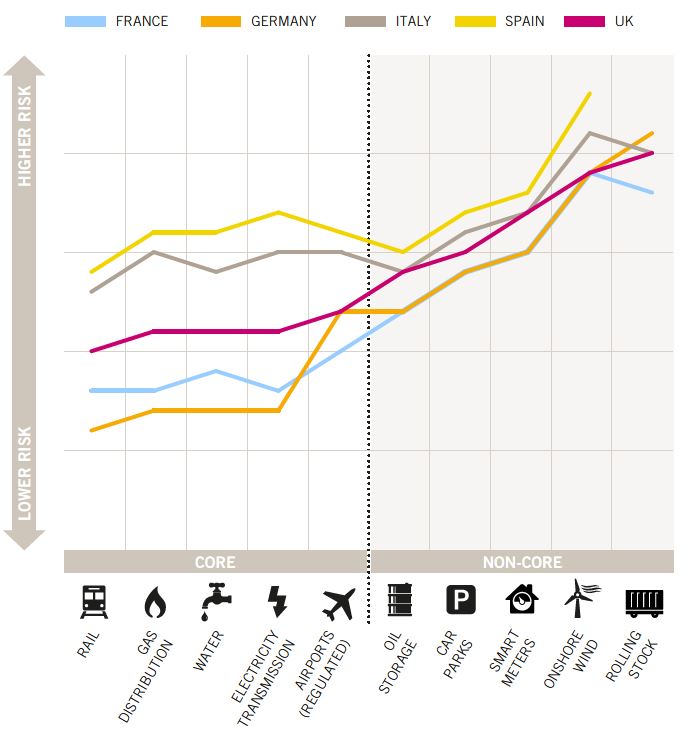 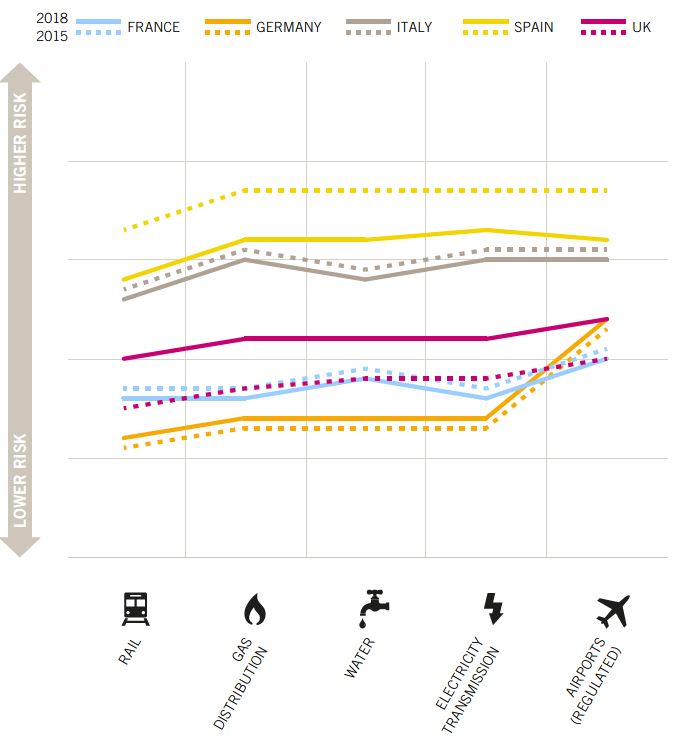 
Core infrastructure in France, Germany and the UK is generally deemed to rank as the lowest risk among those considered above, noting the track record of low political and regulatory risks and the limited commercial risks these sectors face. However, recent policy uncertainty around the direction of Brexit has created increased financial and commercial risk across a range of sectors in the UK.

On the other hand, non-core assets in Spain and Italy are thought to be towards the higher end of the risk scale, reflecting both the higher commercial risks attached to those asset classes and the greater uncertainty around the political and economic outlook in those countries. This is mainly because of the impact of the Eurozone financial crisis on their economies and banking sector and their track record of retrospective changes to regulation in some sectors.

The trade-off between political, regulatory, delivery and commercial risks means that non-core assets in France, Germany and the UK may, to an extent, be similar in risk to core assets in countries like Spain and Italy.

Of course, the risk profile of these sectors is not the sole determinant of whether an investor would find these opportunities attractive or not. A move to non-core infrastructure also offers opportunities for investors to diversify their portfolio risk.

We would also observe that the level of risk associated with core infrastructure assets has in many cases changed over the last few years, as shown in Figure 2. For example, in the UK, there has been an increase in risk associated with uncertainty driven by Brexit as well as the potential renationalisation of essential public infrastructure. In Italy and Spain, financial risks have fallen as the economies have experienced post-financial crisis recovery. Political risk in France is generally considered to have fallen with the election of a centrist government which is perceived as business-friendly.