First judgments in the Ryanair State aid appeals: claims of discrimination based on nationality dismissed but the show is likely to go on

Welcome onboard, buckle up tight

The aviation sector has been hard hit by the pandemic. It went from EUR 30 billion in profits in 2019 to EUR 135 billion in losses in 2020. As a result, many EU Member States opened their wallets and offered support to both airlines and airports. There have been over 60 support measures targeting the sector, covering approximately EUR 25 billion. Under the EU State aid rules, such measures need to be approved by the European Commission.

One company, in particular, has taken issue with this aid. Ryanair alleges that Member States are “selectively gifting billions of euros to their inefficient flag carriers”. It has launched a torrent of appeals against the EC decisions approving State aid in the airline sector. Currently 15 appeals have been lodged at the EU General Court, including against support measures to Finnair, Lufthansa, and SAS.

Last week the General Court handed down its first two – much awaited – judgments (here and here). The importance of these judgments goes beyond the aviation sector. The Court upheld the approach chosen by the EC to weather the crisis, offering relief to both current and future aid beneficiaries across the EU.

The two General Court judgments concern State aid schemes in France and Sweden (as opposed to individual aid to one company). In order to benefit from these schemes, airlines must hold a national aviation license. This left Irish-registered Ryanair without opportunity to receive aid under the schemes. Prompted by a feeling of discrimination, Ryanair appealed the schemes arguing that they undermine the EU’s single market for air travel.

The Court rejected Ryanair’s challenges, concluding that the schemes were necessary, appropriate and proportionate in light of their aims – to remedy the effects of the pandemic. Further, the schemes did not discriminate against airlines that are excluded from their scope. Acknowledging that there was a difference in treatment based on principal place of business, the Court found this was justified. Member States do not have unlimited resources, and by limiting the eligibility to airlines with a national license, France and Sweden established a link, tying the recipients of aid to their economies.

Ryanair’s argument that it is the third largest carrier in France and fourth largest in Sweden – and therefore should also be entitled to support - did not sway the Court. A Member State can reserve aid to those airlines that are most severely affected by its travel restrictions. Air France – a key beneficiary of the French scheme – operated almost 99% of its flights in, from or to France, the same percentage for Ryanair was only 8%.

The judgments offer a soft landing for the EC and the two Member States concerned. And they are likely to offer some relief to governments and airlines that are still to have their day in court with Ryanair.

Prepare for some turbulence

We have not seen as aggressive challengers as Ryanair against aid in other sectors. So, let’s look at the wider context of Ryanair’s appeals, and whether the aviation sector is indeed a ‘one off’.

Given the unprecedented impact of the pandemic, it is no surprise that Member States have allowed for substantial increase in State aid. To date, the EC has approved over EUR 2 trillion in aid, split between more than 550 cases across a vast range of sectors. Most of the aid has been given on a cross-sector or industry-wide basis, with very few measures targeting individual companies.

The aviation sector is a notable exception. Here, the majority of aid is granted to specific companies, cover airlines such as Finnair, Lufthansa and SAS, as well as airports, such as Brussels National Airport and Jože Pučnik Ljubljana.

A recent impact assessment from the European Parliament singles out aviation as the largest beneficiary of State aid during the pandemic. And indeed, the number of State aid cases in the sector was a record-breaking 48 in 2020, up almost 350% from 2019. 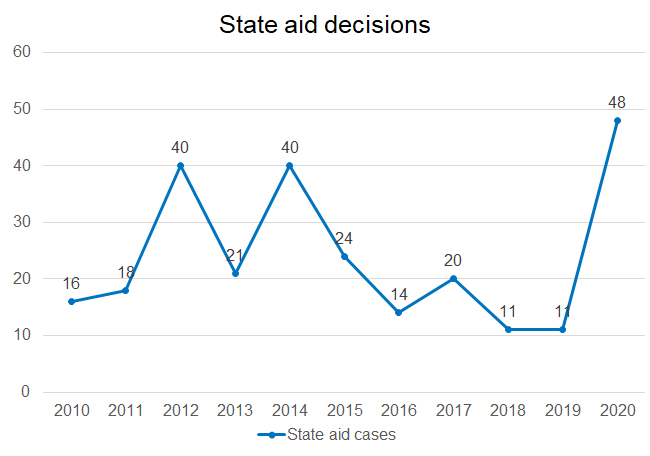 Concerns linked to this have not been voiced by Ryanair only. There is broader fear of an asymmetric recovery, where State aid measures will pick the winners of the future. It is argued that companies in Member States with deeper pockets will gain an unfair advantage. 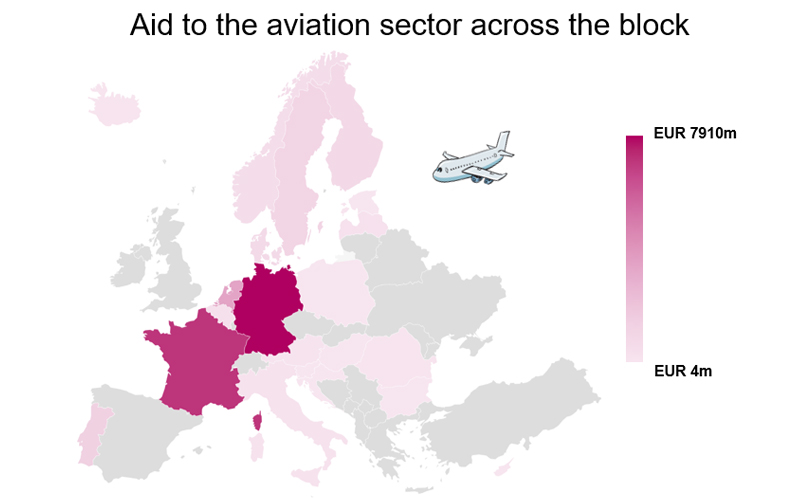 Against the bleak background of the pandemic, the General Court recalled however that “the resources which may be allocated by the Member State concerned are finite and must therefore address priorities”. The decision to support a certain sector or company is therefore ultimately the Member State’s. The EC must ensure that all measures follow the State aid rules, but it is “not required to prove, positively, that no other conceivable measure [..] could better achieve the intended objective”.

We look forward to welcoming you on board again

While the landing strip out of the pandemic is in sight, there is still some fog ahead. It will take months, if not years, for the aviation sector to bounce back. Many uncertainties remain and further State support cannot be ruled out.

The General Court’s judgments offer assurance to the EC, noting that the assessment took place “in the context of a pandemic and the extreme urgency in which the EC adopted the Temporary Framework”.

Although Ryanair’s arguments did not fly, the airline is unlikely to call it a day. Ryanair has already announced that it will appeal the judgments to the Court of Justice, stating that “[n]ow is the time for the European Commission to stop caving in to national governments’ inefficient bail-out policies and start protecting the single market, Europe’s greatest asset for future economic recovery.” The direction of travel is clear, and we still haven’t seen the end of it.