This edition of Insolvency Bitesize is set against the backdrop of the developing “EFF crisis” with squeezes on energy, food and fuel creating uncertainty for the future. But while the shelves may be empty, developments affecting the restructuring and insolvency market are far from being in short supply. As ever in periods of uncertainty, it pays to stay focussed.

The All Party Parliamentary Group on Fair Business Banking Report on “Resolving Insolvency” was published last month. It was highly critical of the IP industry, the regulatory framework and the practice around taking appointments. R3 has made clear its disappointment with elements of the report and its lack of understanding of the framework. We can see that many of the proposed changes could have broader, and unintended, repercussions for both the lending and corporate rescue environment. With the Government due to report shortly on its consultation into the IP regulatory framework, it seems likely that the report and its proposals will attract further attention. We know that many of you have strong opinions about how representative this report was of modern practice and would be keen to continue the conversation.

Around the same time, the Insolvency Service published its annual plan for 2021 to 2022. One notable inclusion was its plan to work on proposals for whether to incorporate the Model Law on Recognition and Enforcement of Insolvency-Related Judgments into the UK legislative framework. It will involve, in large part, a decision as to whether to retain, modify or reject the Gibbs rule. That could well determine the state of the UK restructuring and insolvency market for years to come, have ramifications for the cost of borrowing and even the attractiveness of English law in international finance.

We recently advised Caffè Nero whose nominees and directors were fully vindicated by the High Court’s rejection of all allegations of material irregularity and unfair prejudice brought by a disgruntled landlord against Caffè Nero’s CVA (which had secured the overwhelming support of creditors late last year). If you’ve not seen it already, have a read of our client alert which highlights the key takeaways for IPs.

In this edition of Insolvency Bitesize, we take a look at:

We hope you find this edition useful. As ever, please get in touch with any questions you may have.

Topics covered in this report

The Scottish Court of Session recently refused Prosafe’s petition for recognition of its Singapore moratoria in the UK under the Cross Border Insolvency Regulations 2006. Put simply, the CBIR could not be used to side-step the effects of the Gibbs principle in respect of English law governed claims which simply fell outside of the Singapore restructuring accordingly and could not be restricted by it. 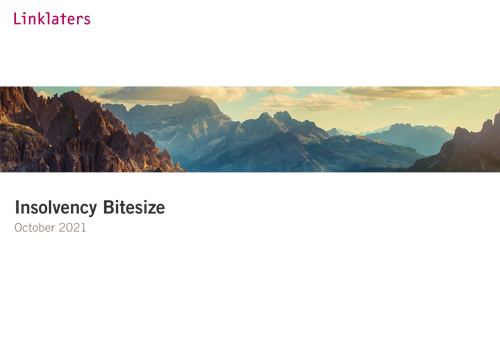 Welcome to the latest edition of Insolvency Bitesize. Despite a sluggish market since our last edition, Part 26A restructuring plan and CVA legal developments have been lively.Find out more on our website.

In this first ‘new look’ Insolvency Bitesize, we reflect on what some of the key legal and market themes might be in the year ahead.

Against that backdrop, this edition focusses on a broad range of recent insolvency developments. We kick-off with a piece featuring the National Security and Investment Bill and show how it might affect insolvency sale transactions. We cover recent decisions on the extent of an administrator’s duty of care to bidders, the impact a deed of priority had on the enforceability of a floating charge for the purposes of Paragraph 16 of Schedule B1 and highlight the court’s continued development of its approach to dealing with procedural failures when appointing administrators out-of-court. We take a broad overview of insolvency developments in the financial services sector and then conclude this edition by highlighting how even post Brexit, COMI will remain a key part of the UK insolvency lexicon.

The Chancellor of the High Court has published guidance on how the courts will deal with the e-filing of a “notice of appointment of an administrator” when the court is closed – this is an issue that has caused a great deal of confusion recently with several court decisions taking different approaches to the underlying difficulties.

Welcome to the latest edition of Insolvency Bitesize. The Government has published a consultation on Insolvency and Corporate Governance in the wake of recent high-profile corporate collapses. Some of what is proposed is far reaching, although at this stage, it is light on detail. We take a look in this edition.

Welcome to our new look Insolvency Bitesize. You can now navigate by clicking on each "bitesize chunk" below to read further. We hope you like it.