The nature and extent of duties of good faith in English law remains controversial.

We have tracked these developments for many years through a practice note for Practical Law (available here) which provides a detailed and comprehensive overview of the current state of the law. This article is not intended to summarise that note but rather to provide practical tips on using these duties in practice.

1. Identify which aspect of good faith might be engaged

The starting point is that there is no general doctrine of good faith in English contract law. Instead, duties of good faith can affect a commercial contract in three distinct ways:

While the three duties influence each other and the courts do, on occasion, elide them, it is generally helpful to consider each duty separately. They are based on different authority and subject to different policy considerations.

2. Implied duties of good faith; are you in the zone?

The most contentious of these duties is implied duties of good faith for which the "law has not yet reached a stage of settled clarity" (Cathay Pacific Airways Ltd v Lufthansa [2020] EWHC 1789).

The debate about implied duties of good faith is largely a balance between certainty of contract and the desire to provide more flexible and equitable solutions to perceived injustice. The fear is that implied duties of good faith would create too much uncertainty by creating obligations that are potentially vague and subjective. This could undermine the goal of contractual certainty, on which English law places great weight.

However, this assessment should be mainly driven by the underlying commercial context rather than a blanket approach based on an assumed type of contract or business sector. The assessment is likely to be a product of the complexity of the relationship and the extent to which the relevant issue is expressly dealt with in the contract, as illustrated in the simplified diagram set out below. 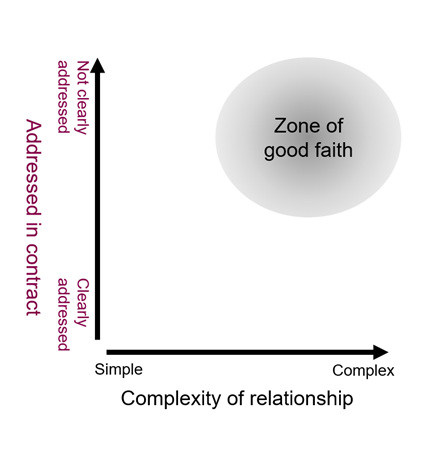 The concept of a “zone of good faith” is underpinned by the current approach to implying a duty of good faith and the limited scope of the duty (both discussed further below). In particular:

Approached in this way, implied duties of good faith would be constrained to complex relationships where the parties have not expressly addressed the issue in their agreement. Fears this could either undermine the express terms of the contract or upset financial markets, where many contracts are one-off and transactional, seem unlikely to materialise.

3. Identify the basis for the duty: Implied term or relational contract?

Even within the “zone of good faith”, a duty will not necessarily arise and further analysis will be needed. Determining if an implied duty arises requires an assessment of the two competing visions for this duty:

It is not clear which of these visions from the progressive or conservative wings of the judiciary will win out. However, it is worth noting the recent elevation of Lord Leggatt, whose positive views on duties of good faith are clear both from his decision in Yam Seng and his later decision in Al Nehayan.

4. Don’t overestimate the strength of an implied duty of good faith

For example, the Court was happy to accept a 25-year PFI contract was a "paradigm example of a relational contract in which the law implies a duty of good faith" (Essex County Council v UBB Waste [2020] EWHC 1581) without finding that any of the Council’s actions came close to the “sharp practice” indicative of a breach of a duty of good faith.

5. Plead at your peril

The final point is that the assertion that a party has not acted in good faith is a serious allegation. The courts will expect the party making the allegation to plead its case in sufficient detail so that the other party knows exactly what breach is alleged and when it took place.

This is not a point to raise lightly. In Essex County Council v UBB Waste [2020] EWHC 2387 the court concluded that to plead a breach of good faith without proper foundations may be considered out of the norm and thus justify an order for costs on an indemnity basis.