The European infrastructure market has experienced significant interest over the past few years – a 60% increase in the volume and value of transactions since 2012. A major driver of this has been the rise of investments in “non-core”, or “core+” and “core++”, infrastructure in recent years. We explore the growth drivers behind non-core investing and look more closely at some of the fast-growing areas.


What are core and non-core assets?

Core+: An investment that bears some market risk but has features that limit risk. For instance, long-term contracts, barriers to entry for competitors, and a long-term price support scheme from governments. Typical examples of Core+ include renewable energy assets and non-regulated airports.

Core++: Similar to Core+ assets but with a higher associated degree of market risk. Core++ includes essential services provided on a fully-marketed and competitive basis, with higher-margin volatility. For instance, this may include car parks, motorway service areas and ports. This category may also contain core assets in emerging markets that may not have the same level of maturity and track record in maintaining a system of economic regulation.


The rise of non-core investing

Transactions in the European infrastructure market have grown in quantity and value over the last few years. The number of transactions increased from 272 to 441 deals between 2012 to 2017, and the value of transactions from £43.6 billion to £68.8 billion.

As Figures 1 and 2 show, much of this growth – particularly in respect of the value of transactions – has been from deals in core+ or core++ infrastructure. From 2013, deal value in non-core infrastructure has approached – and sometimes exceeded – 50% of total annual deal value for the sector as a whole. 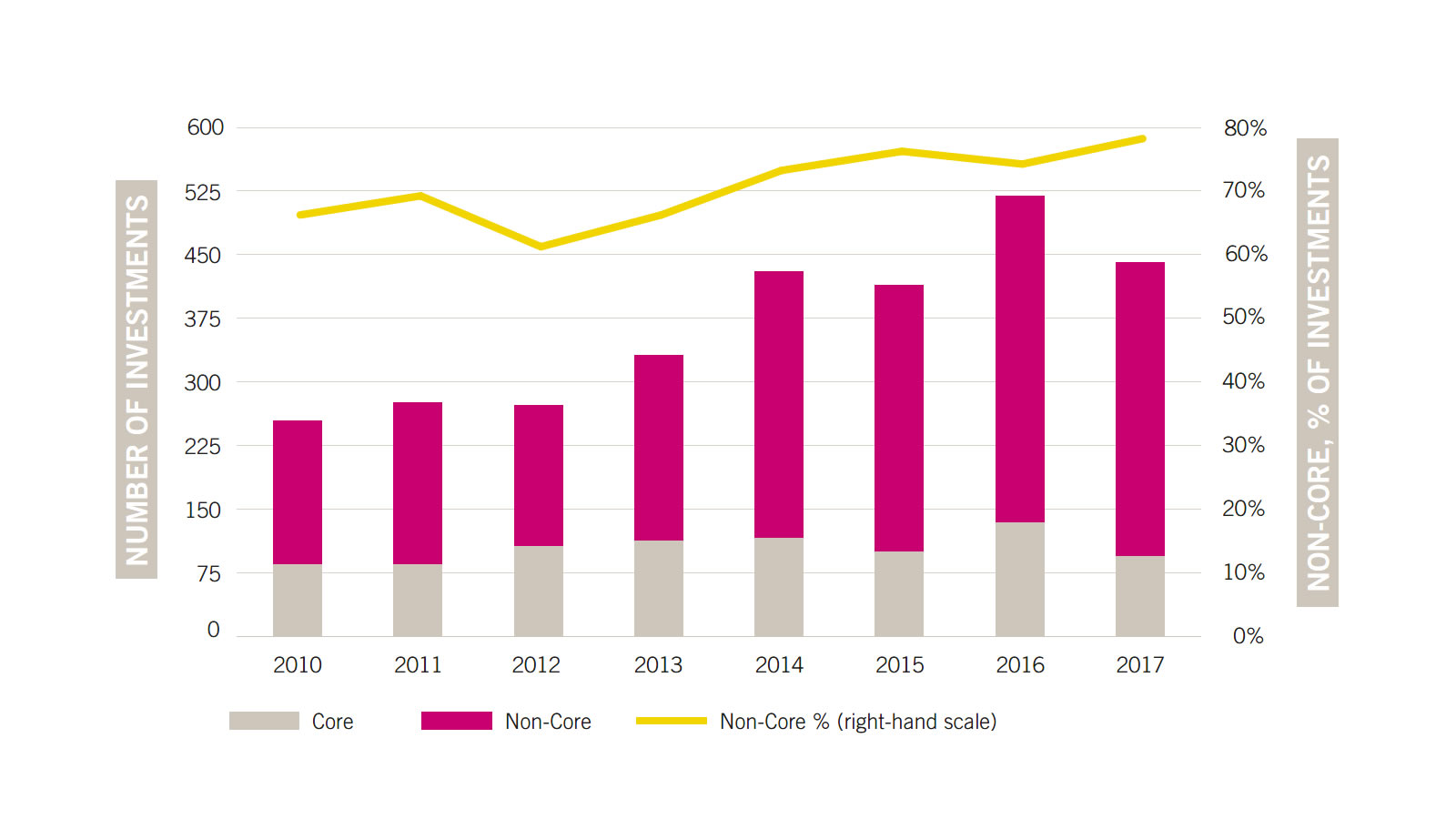 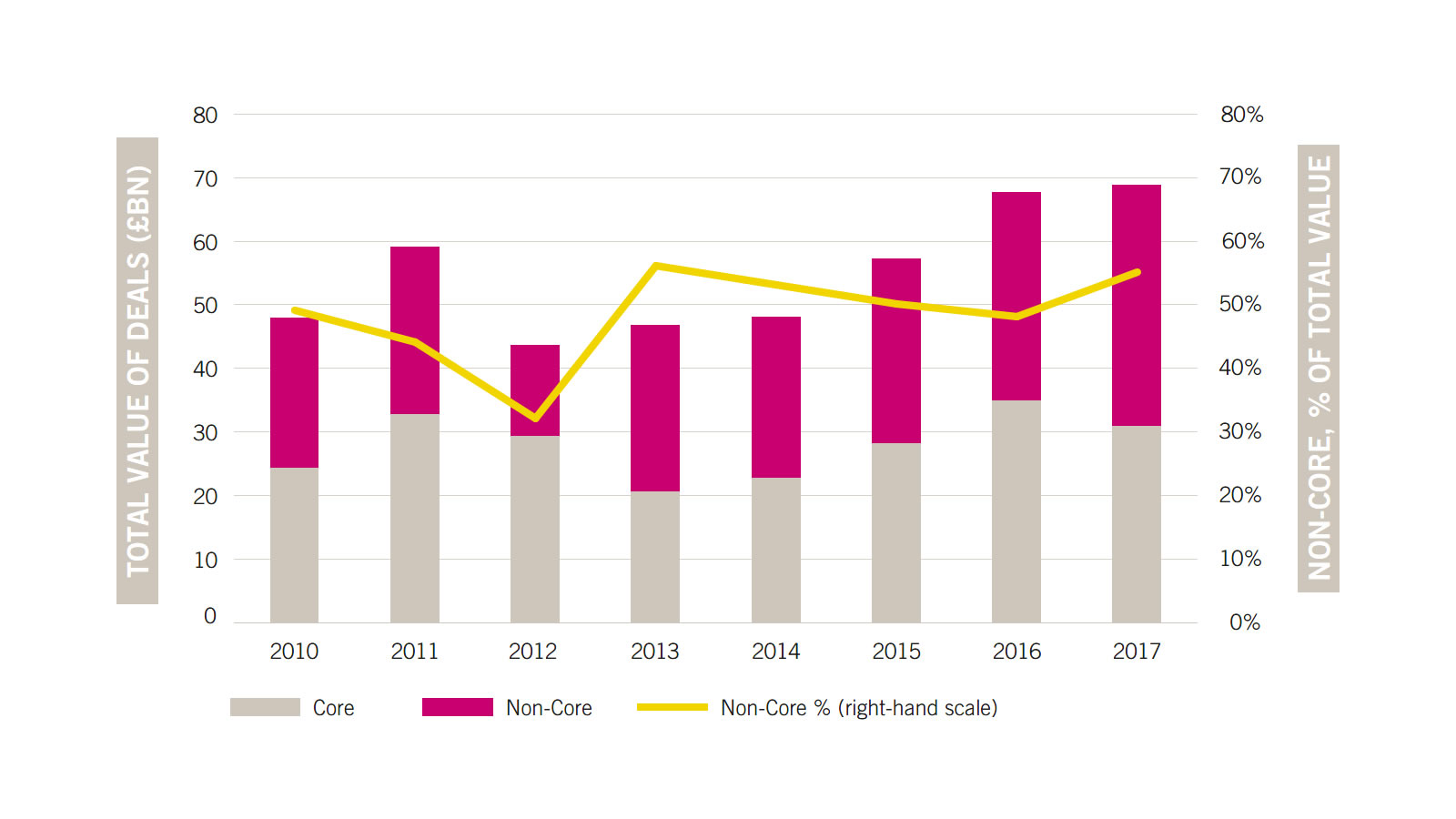 This trend towards investment in non-core European infrastructure is particularly prominent among investors from the US, Canada and Asia, as Figure 3 illustrates. 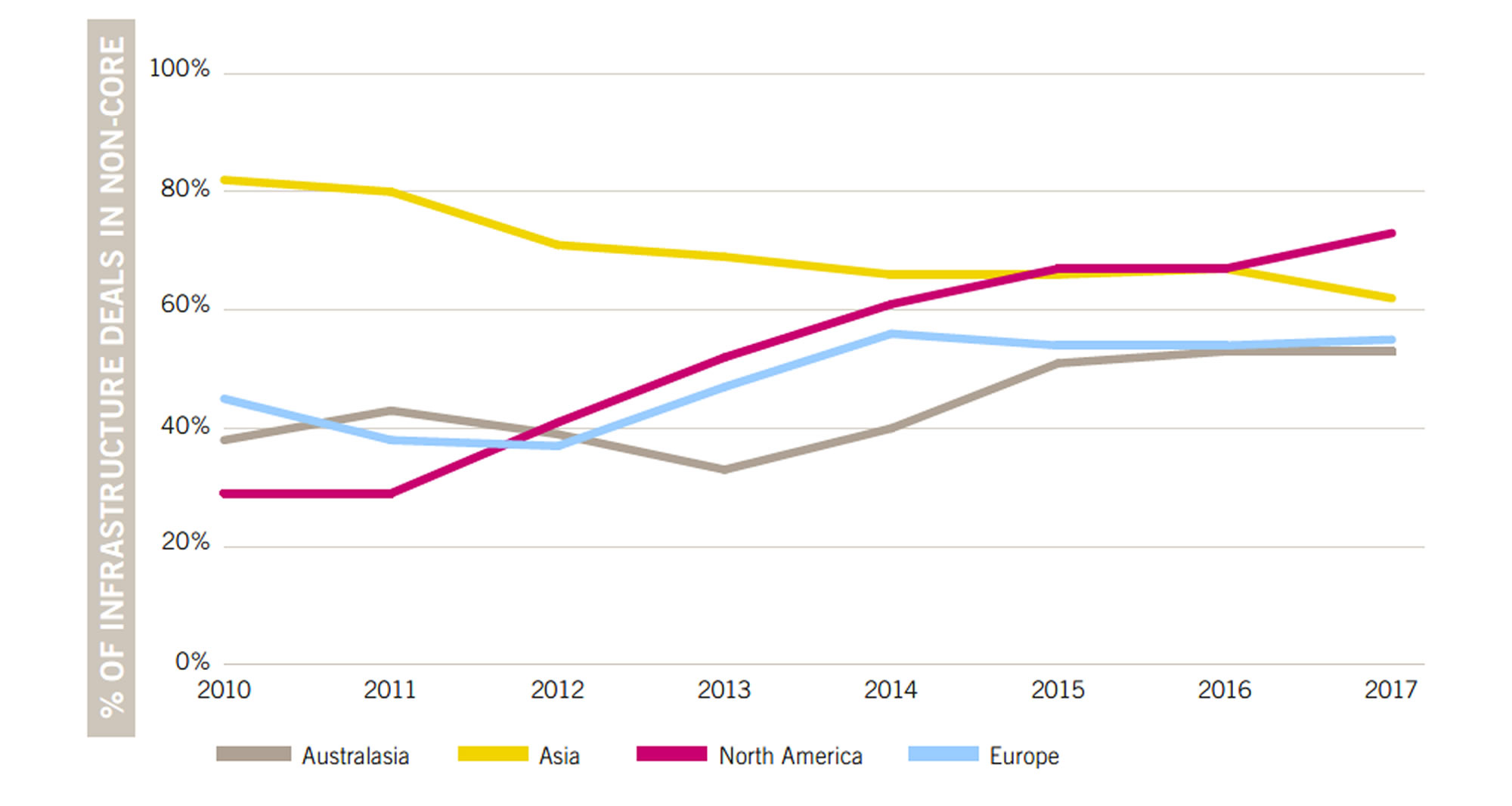 Supply of, and demand for, core+ and core++ infrastructure assets in Europe has been rising.

Investors are increasingly experiencing pressure to move into higher-yielding non-core infrastructure. More established investors have been able to expand their investments into non-core assets, as they have the knowledge and capabilities to do so. They are often keen to be innovative and ahead of the curve.

We describe some of the demand and supply factors driving the increase in core+ and core++ investing in more detail below.

Since the financial crisis, we have continued to see record low interest rates, and more importantly, an expectation that interest rates will remain at low levels well into the future.

Uncertainty around financial markets, the economic outlook and recent political instability may also have increased the demand for assets with stable and predictable returns, such as infrastructure.

Demographic drivers have also been significant for the overall size of infrastructure funds. An individual's pension savings are typically greatest at retirement. At this point, they switch from accumulating savings to drawing-down from their savings. The "baby-boomer" population is currently approaching retirement age (typically between 60 and 70, depending on gender, country, and age). This may significantly drive the overall size of pension funds.

Moreover, as an increasing proportion of the population approaches retirement age, the appetite for risk among investors falls as investors are more cautious about investing in assets with short-term volatility.

Regulation for financial institutions such as Basel III and Solvency II/III have increased the amount of capital which these institutions – such as banks and insurance companies – must hold. It has also changed the types of assets that qualify as acceptable types of "low risk" assets.

With infrastructure as one such acceptable asset class, financial institutions' appetite for holding infrastructure investments has increased in order to help them to meet their capital adequacy targets.

Recent years have seen a significant increase in the number of core+ and core++ assets coming to market. Many of these have always existed and, indeed, have always been regarded as infrastructure. However, a number of new asset classes have emerged or grown very rapidly in recent years.

Fastest-growing core+ and core++ sectors since 2012

Changes in the energy sector have been one of the biggest drivers of growth in new non-core investments. Since 2012, the number of renewables deals has grown almost three-fold.

Oil majors have similarly sought to restructure their portfolios in recent years following a significant fall in oil prices. Mid-stream assets, such as pipelines and terminals, have been popular choices for carve-outs and divestments. They are often snapped up by infrastructure investors recognising the stable demand for these assets and limited exposure to the volatility of underlying oil prices. An example includes Total’s sale of North Sea mid-stream assets to ArcLight Capital Partners in 2015, on which Linklaters advised.

Telecoms and mobile towers have also been the subject of several recent transactions. This is part of a wider global trend of mobile network operators (MNO) looking to realise cash for investments in rolling out 4G or for market expansion. Examples include the Abertis sale of Spanish masts business Cellnex and Macquarie's acquisition of Denmark's biggest telecoms company TDC, jointly with a group of Danish pension funds. In 2018, Linklaters advised on the financing of KKR’s bid for the acquisition of a stake in Altice’s telecom tower business in France. The transaction coincided with Altice selling a stake in its Portuguese tower business to a consortium, which Linklaters also acted for.

Rolling stock companies have also attracted infrastructure players in recent years. For example, Morgan Stanley Infrastructure Partners acquired a minority position in German-based VTG, Deutsche Alternative Asset Management took a 50 per cent stake in France- based Akiem, and a consortia of investors acquired Porterbrook and Angel Trains – both of which Linklaters advised.

Looking further afield, car parks and hydro power have been among the fastest-growing non-core sub-sectors since 2012. Car parks in particular have seen numerous deals in recent years, including Empark, Vinci Park (now Indigo) and Parkia.

Furthermore, new deals in new sub-sectors are continuing to extend the conception of "non- core" infrastructure: for example, deals in sectors such as funerals and crematoria, roadside assistance, and holiday and theme parks.

In 2015, Linklaters advised Terra Firma and co-owner Deutsche A&WM on the sale of Tank & Rast, the German motorway service company, to a consortium of investors. Also, in 2015, Center Parcs was bought by Brookfield Property Partners for a reported sum of around £2.4bn, in a competitive bid process.

"Center Parcs, and theme parks in general, can be considered to be core++ assets. Their resorts' infrastructure-like robustness to macroeconomic fluctuations – in that they are still likely to be visited during downturns as they are local and cheap – supports the argument that they are core++ rather than private equity assets.

They are also to an extent protected from competition risk, in that it is unlikely that competitor attractions will be built very close by."