Law banning agency workers from covering during strikes is repealed

As of 21 July 2022, it is now possible for employers to plug staffing gaps caused by strikes by hiring agency workers.

Prior to that it was a criminal offence for agencies to supply temporary workers to cover for workers taking part in a strike or industrial action (under Regulation 7 of the Conduct of Employment Agencies and Employment Business Regulations 2003 (“Reg 7”)).

On the face of it, employers who face industrial action may see this as a helpful development. But the impact of hiring agency workers on trade union relations and practical challenges, such as the shortage of suitable agency staff (including their potential reluctance to cross the picket line and the difficulty of finding suitably trained staff on short notice), mean it is unlikely to be a complete solution for employers.

A brief history of Reg 7

The origins of Reg 7 date back to a period of tumultuous relations between trade unions and the government. Labour had taken over government in 1974, following intense national coal strikes which led to the fall of Tory Prime Minister, Edward Heath. In an attempt to improve industrial relations, Labour implemented a raft of measures. This included introducing the Trade Union and Labour Relations Act 1974 to clarify trade unions’ rights and soon after introducing the predecessor to Reg 7. It was introduced in the Conduct of Employment Agencies and Employment Businesses Regulations 1976 (which were ultimately replaced by the Conduct of Employment Agencies and Employment Business Regulations 2003).

Reg 7 made it a criminal offence for agencies to knowingly (including having reasonable grounds for knowingly) providing temporary workers to an employer to perform the duties of workers taking part in an official strike or in other official industrial action. Reg 7 did not restrict employers from directly employing a replacement.

Of course these measures were not enough to repair trade unions relations and only a few years later came widespread strikes known infamously as the Winter of Discontent.

Why has the Government repealed Reg 7?

Fast forward 44 years later and some commentators are arguing we are facing a similar crisis - a Summer of Discontent. In an attempt to lessen the impact of a “Summer of Discontent” and future strike action on the wider economy, the Government has implemented a Statutory Instrument (the Conduct of Employment Agencies and Employment Businesses (Amendment) Regulations 2022) (the “Amendment Regulations”) which repeals Reg 7. The Government has emphasised that companies relying on the change will need to make sure that any agency workers they hire have the necessary skills and/or qualifications in order to meet health and safety obligations.

This is not the first time that calls have been made for Reg 7 to be repealed. The Conservatives launched a consultation on the matter in July 2015. No response to the consultation was ever published at the time, but the Government has now disclosed some information about the responses in the Explanatory Note to the Amendment Regulations.  As shown in figure 1 below, the majority of those who responded were of the view that repealing Reg 7 would have a negative effect.

Nonetheless, the recent railway strike prompted the Government to revisit this matter. The Government has justified the repeal of Reg 7 as necessary to tackle the “unreasonable” and “disproportionate” impact of the strikes for members of the public and the “unreasonable costs to businesses at a time when everyone is struggling with the rising cost of living and doing business”. 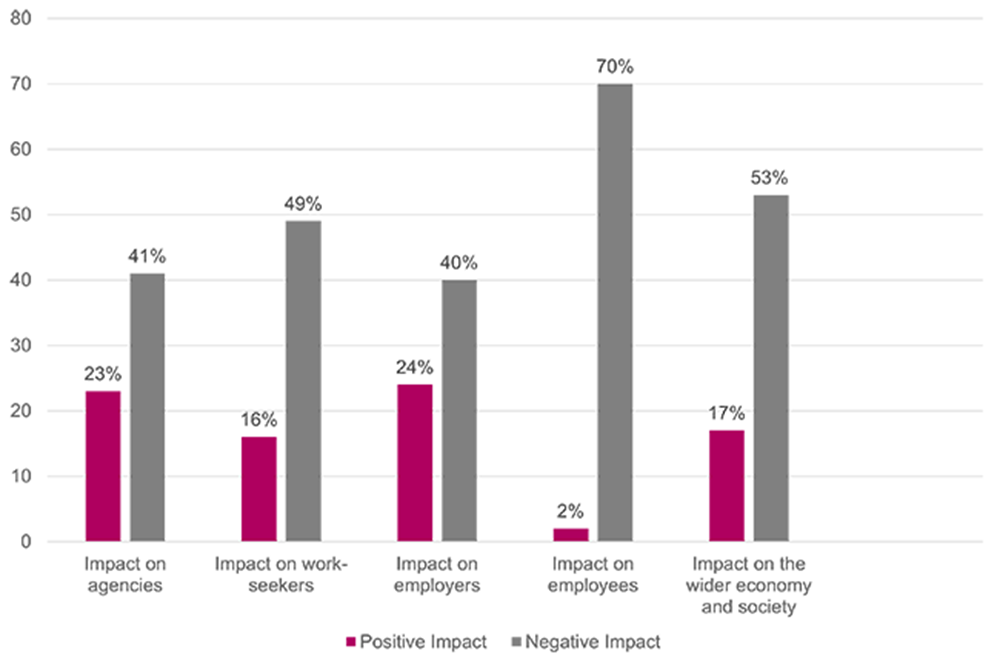 Challenges to the repeal of Reg 7

Given the UK’s history of industrial relations, it is perhaps unsurprising that the repeal of Reg 7 has come under fire by stakeholders. Agencies say they would face reputational damage from sending workers across a picket line to cover striking workers. Others say it is unworkable due to the shortage of suitable agency workers and it will only inflame tensions and prolong conflict. Unison has threatened to bring a judicial review claim of the Amendment Regulations and argues the new law is in breach of Article 11 of the European Convention on Human Rights (which protects the right to strike), and international labour standards.

As the strikes continue and companies seek to rely on agency workers to plug staffing gaps, we will have to wait and see how public and stakeholder opinion on the repeal of Reg 7 develops. In any case, from what we have seen in the Tory leadership contest, further reforms to trade union laws cannot be ruled out so this could just be the start.

To find out more about workplace activism, visit our dedicated page here.