UK insurtech slips out of the sandbox

The Kalifa review into the UK fintech sector praised the “instrumental role” of the regulatory sandbox in supporting innovation. But the proportion of insurtechs taking part in the FCA’s sandbox has fallen steadily over the last five years. Kalifa-inspired recommendations could see this trend change course.

Insurtech and the regulator

Playing in the sandbox

The Financial Conduct Authority launched its regulatory sandbox in 2016. Insurtechs have participated in every cohort of the FCA regulatory sandbox since. But, as this chart shows, the proportion of insurtech solutions has declined steadily over the last five years. 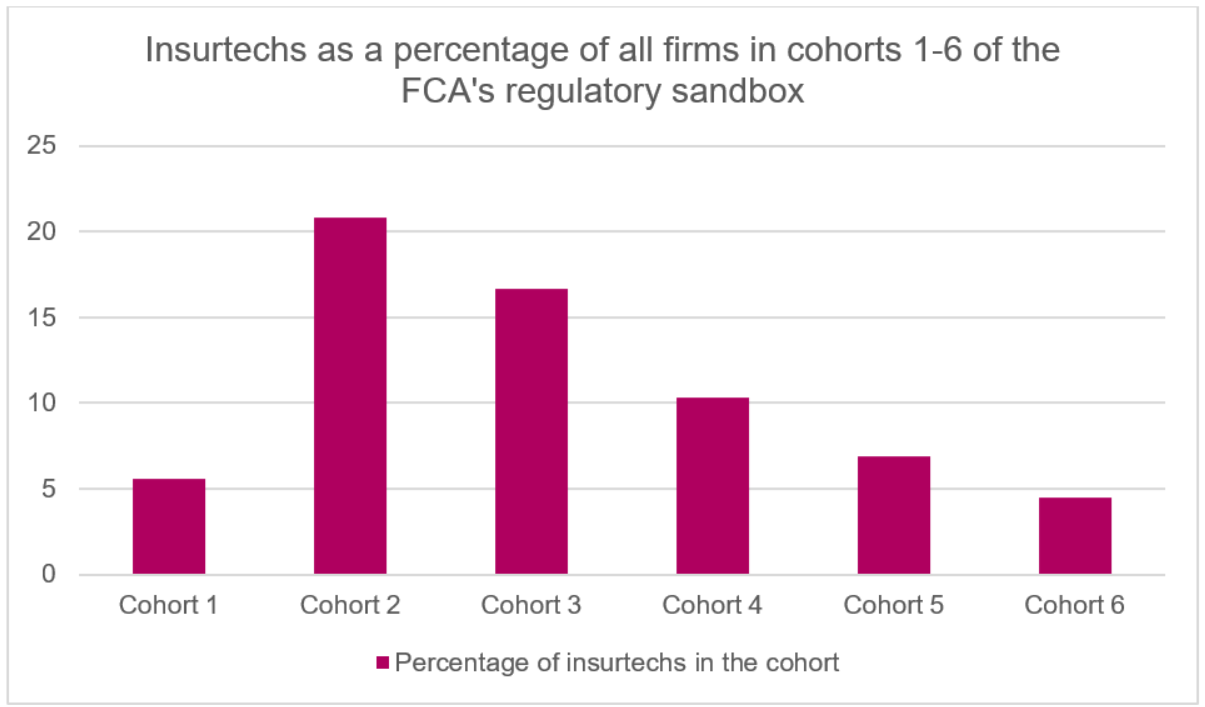 2016 also saw the most recent public intervention from the FCA on the crossover between insurance and technology. FCA Feedback Statement 16/5 looked at the use of Big Data in retail general insurance. The paper concluded that Big Data was “broadly having a positive impact on consumer outcomes”.

Back then the FCA hinted at potential further work. For example the FCA wondered whether increased risk segmentation caused by Big Data could lead to reduced access to insurance products for some groups eg higher risk customers. But there had not been any further policy developments in this area, until recently.

Insurtech back on the agenda?

There are two signs which suggest that attention might turn back to insurtech. The first is another FCA feedback statement. The second is the regulator’s response to the Kalifa report.

FCA Feedback Statement 21/7 explores how Open Banking could be applied to other areas of financial services, including insurance products (see also our previous blogpost which explains Open Banking). “Open Finance” would be based on the principle that customers can share their data held with one provider with third party providers in a secure way. If Open Finance follows the Open Banking model, insurers and other financial services firms could be required to share customer data.

There is some way to go yet before Open Finance takes off in the UK. But the idea – along with similar proposals in the EU – suggests that insurtech providers using data to improve customer outcomes will have the wind at their back.

Separate to this policy work on Open Finance, the FCA is also making changes to its regulatory sandbox. The sandbox is a controlled environment for firms to test innovative products with real consumers. The FCA has confirmed it plans to pick up a couple of recommendations made by the Kalifa review into UK fintech to improve how the sandbox works.

The FCA is due to release more detail about changes to its sandbox by autumn 2021. On Open Finance, the FCA says that it plans to support the Government’s policy work in this area and help industry-led development of common standards.

x COP26 and beyond