Few sports have felt the impact of Covid-19 as much as tennis over the last twelve months. Re-emerging from its initial shut down, the game has adapted to the pandemic with varying levels of success – from the unsanctioned Adria tour in June, to navigating the challenges of hosting grand slam events in New York, Paris and Melbourne.

While the WTA and ATP tours (the respective women’s and men’s circuits) gamely limp on amid ongoing disruption to event schedules and player participation, behind the scenes, the formation of the International Tennis Integrity Agency (ITIA) in 2021 – along with recent changes to the Tennis Anti-Corruption Programme (TACP) – are the latest steps being taken to reinforce the integrity of the sport.

The Tennis Integrity Unit (TIU) was formed in 2008 on the heels of the Environmental Review of Integrity in Professional Tennis. This review – which proposed an integrity unit to collect and analyse intelligence (and, ultimately, provide evidence to bring disciplinary charges) – also identified five “principal threats” facing tennis. These included two threats in relation to gambling, not least the misuse of inside information for corrupt betting purposes (the other threats included rule and code breaches, in particular not giving best efforts (or “tanking”); accreditation abuse and violation of credentials; and illegal or abusive behaviour towards players).

Following an Independent Review Panel report in 2018, the TIU has now been subsumed into the ITIA. Funded by the game’s major stakeholders – more specifically, the International Tennis Federation (ITF), WTA and ATP, as well as the four grand slams – the ITIA’s aim is to “promote, encourage, enhance and safeguard” the integrity of professional tennis worldwide.

The shift from the TIU to the ITIA is more than a rebadging, however. A number of substantive changes have accompanied the transition, including:

Corruption on the circuit

In August 2020, a Europol report, The Involvement of Organised Crime Groups (OCGs) in Sports Corruption, cited tennis as one of two sports most impacted by OCGs. The risk is particularly acute at lower ranking events on the (ATP) Challenger and (ITF) World Tennis tours – where betting schemes range from match fixing to spot (e.g. point, game and set) fixing, across pre-match and in-play markets.

On these lower-level professional circuits, tennis is especially vulnerable. Events have little or no video coverage, prize money is invariably low (players are, according to the Europol report, “easier to corrupt”), and in-match odds are particularly volatile to frequent shifts in match momentum. 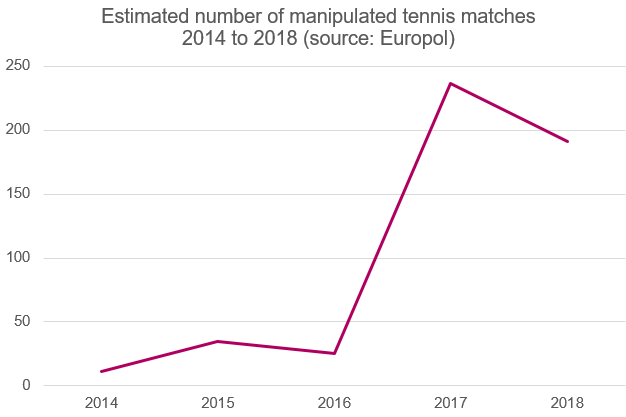 It is not just players who are being charged with allegations of match-fixing and betting. As ITIA’s 2020 annual review and the Europol’s report make clear, chair umpires, line judges and other officials are also being sanctioned – in one notable case in July 2020, an umpire was suspended and fined for soliciting other officials to manipulate match scores.

Against this backdrop, the TACP rules have recently been refreshed. These anti-corruption rules apply to all “covered persons” – in short, to players, related persons (e.g. coaches, trainers, family members) and tournament support personnel, including match officials.

The 2021 refresh of the TACP incorporates some key changes, including the addition of “courtsiding” as a separate offence. Simply, courtsiding (which is not illegal in most countries) involves transmitting real-time information to third parties for betting purposes. It is by no means a new phenomenon, and while measures have been taken to eradicate courtsiding, the TIU brought its first charges against a player in relation to the offence in September 2020.

Among the other changes to the TACP:

Down the line – what next for professional tennis?

In the short term, anti-corruption issues will continue to present unique challenges for the ITIA: from lower-ranked players under increased financial pressures (with fewer events and slashed prize money), to the logistical difficulty of collating intelligence and conducting investigations, amid restrictions on global travel.

Looking further ahead, major upheaval within the sport may also be closer than it was a year ago. As well as repeated calls for the ATP and WTA to merge (or, at least, engage in closer collaboration), plans are underway for a proposed breakaway (male) player association; the Professional Tennis Players Association (PTPA) was unveiled on the eve of the 2020 US Open to “provide players with a self-governance structure that is independent from the ATP and is directly responsive to player-members’ needs and concerns”.

What these, and other, proposals will ultimately mean in practice is still largely unknown. But whatever shake-ups are seen in the coming years, tennis will need to stay alive to the ever-present and evolving threats of corruption at the heart of the sport.

Sign up to SportingLinks for more dedicated legal opinion on topical issues in the sports sector.