Like the duck-billed egg-laying mammal that is the platypus (ornithorhynchus paradoxus), the UK’s unique merger control regime confounds neat classification. A voluntary regime for sellers – that isn’t voluntary for buyers – with a proverbial “light-touch” approach… that can sometimes be the world’s most lethal. As regimen paradoxum it is the rare monotreme among the world’s mammals of merger control. A successful encounter in the wild requires careful planning and a healthy respect for its habitat and way of life.

Our first Platypus post introduces the UK regime and the monotreme analogy in more detail. 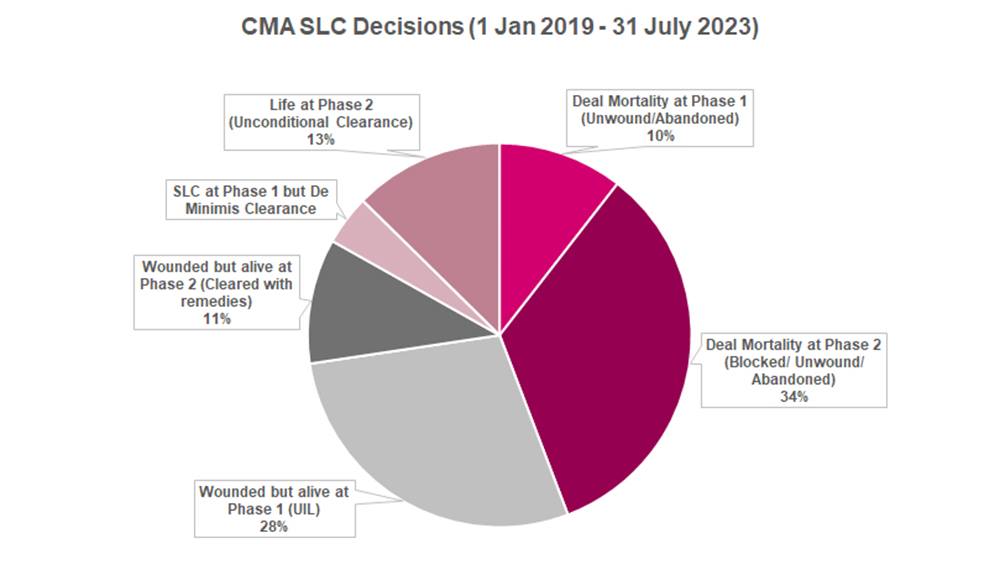 Read our blog post on deal mortality here. Statistical definitions and more detail on our core stats modules can be found here:


On the subject of deal mortality, see also Break Fee at Tiffany’s? – on our Linking Competition global competition blog site.

This season finale was not just any storm in a port – and it made for gripping viewing. After an in-depth second series, the European Commission conditionally cleared Cargotec/Konecranes in February 2022. For the British remake, the ending was completely changed: the CMA blocked the deal with a new twist on a now-familiar procedural story.

The CMA confounded audience expectations by clearing Facebook/Kustomer at Phase 1 – the subject of our first divergence post. In this Platypus post, we consider the CMA’s post Brexit divergence and why this rupture was so significant from a comity perspective.

Show me the money: should the extent of debt leverage be part of a competition agency’s merger control analysis?

The recent acquisitions by financial sponsor investors of two major UK supermarkets have raised concerns by Parliamentarians (including from the head of the Business Select Committee) and in the media, about highly leveraged structures leading to reduced competition in markets.

Platypus now asks the question: is the fact that an acquisition is highly leveraged relevant to a merger review (and should it be?).

Bucharest syndrome: holding onto hold-separates and resisting a mandatory regime

A quiz for the literarily minded: "How can I escape from this dreadful thing of night, gloom, and fear?" Was it: (a) Jonathan Harker plotting his escape from Castle Dracula; or (b) Platypus on the intricacies of the initial enforcement order or IEO?

We do love to hate them. But as is ever the case, better the devil you know than the devil you don’t… Still, Platypus has some judicious suggestions that would make the IEO process work better for the CMA and for parties alike.

Decisive Influenc-er? The Proposed UK Backstop to Block the Next ‘Facebook/Instagram’ (Part 1)

Sweeping competition policy reform proposals by the UK Government include a new test which would allow the CMA to block a Big Tech merger to be on the safe side - one that is realistically but not likely to be anti-competitive. In this post, Platypus asks whether it is wise for the UK to legislate a unilateral British answer to a global question.

The CMA’s new MAGs are here to stay. While in many ways the content of the new MAGs simply codifies the approach to merger review seen in recent years, there are a number of important practical points to be aware of going into your next deal.

Will Not Sync: The challenge of multi-jurisdictional process and substantive friction post-Brexit

Does it Fit? Not a bit. The CMA would not have worn the Google / Fitbit remedy, as its CEO Dr Andrea Coscelli made clear in a speech on 9 February 2021. Google must be glad for the EU One Stop Shop while it lasted... A Commonwealth tandem of the UK and Australia might have effected a very different outcome had the deal been announced today. This blog post explores the challenge of multi-jurisdictional process and substantive friction post-Brexit.

The future is now: Brexit and the end of 30 years of the EUMR One Stop Shop for merger control in the UK

We have written previously about the broad jurisdictional scope of UK merger control and the growing trend of interventionism by the CMA. And as the Brexit transition period comes to an end, many mergers will become subject to parallel review by the European Commission and the CMA. This is not only a concern for 2021 and beyond: for deals signing now and in the coming months, the safe harbour is already receding into the distance.

Companies involved in global deals are finding that increased levels of CMA intervention coupled with the imminent end of the European One Stop Shop for the UK component of transactions, mean that they need to factor into their deals the possibility of a CMA review. This blog post considers the implications of Brexit on merger control, in particular the risk of divergent outcomes for deals involving parallel reviews by the CMA and European Commission.

The UK’s merger control regime has remarkable similarities to a platypus: it confounds neat classifications. The answer to basic questions about the UK’s regime is both yes and no - is it voluntary? Is there an objective qualifying threshold? Other aspects of the UK’s unique regime allow the Competition and Markets Authority (CMA) to go amphibian and reach deals which are off-limits to other authorities.

When is a jurisdictional GOAT not good enough? UK deal nexus and the CMA’s expanded hunt for ‘killer acquisitions’ and harmful vertical mergers

Wearing the iconic section #23 “share of supply test” jersey, the CMA becomes the Michael Jordan of Multi-Jurisdictional merger control – almost unstoppable when motivated. Its superpower is the Greatest Of All Time jurisdictional tests, used to sail over opponents and dunk on foreign-to-foreign “incumbent/challenger” deals. In this Platypus post, we consider the Government’s position that GOAT is not good enough, and that share of supply needs more aerial prowess, but with one toe on British hardcourt – a UK nexus test.

In the run-up to Brexit, the CMA had made a prediction that parallel reviews of former EUMR one-stop shop cases could mean “an additional 30 to 50 Phase 1 mergers per year”, potentially leading to “half a dozen or so additional Phase 2 cases”. So what does the parallel merger control landscape look like one year after Brexit? The sample size is small, but are there any emerging trends or lessons we can draw out?

Decisive Influenc-er? The Proposed UK Backstop to Block the Next ‘Facebook/Instagram’ (Part 2)

If the UK Government wishes to press ahead with a new regime to block GAFA mergers that are unlikely to harm competition, then it should consider maximising the legitimacy of developing such a powerful weapon.

Last week, we proposed testing for US and EU support in principle as way of increasing legitimacy. This week, we propose a complementary tool to reinforce this… the British courts.

The CMA’s expansive interpretation of the current jurisdictional tests has recently been confirmed by the CAT. So why is the Government proposing to stretch the tentacles of UK merger control even further in the name of ‘rebalanced merger control’? What’s left to rebalance? Our latest Platypus post answers these questions and more.


Warning: This post is one for the very ssmall but ssignificant ssub-ssection of ssubscribers who self-identify to the Venn diagram overlap between real UK merger control ; nerds and scholars of ’80s movie references.

Check back soon for some more useful practical thoughts on the new MAGs when they are published.

Platypus in the Competition Law Journal: The long arm of UK merger jurisdiction

Platypus team members took a pause from blogging to contribute to the latest issue of the Competition Law Journal, focusing on themes that should be familiar to regular Platypus readers – the CMA’s approach to merger enforcement, the elastic nature of its jurisdiction, and its increasing willingness to intervene in “foreign-to-foreign” deals with limited nexus to the UK.

Let’s call the whole thing off: the CMA’s transatlantic hunt for killer acquisitions

Astaire and Rogers make dancing on roller skates look easy. The same could be said of the “voluntary” UK regime on the merger control map. Yet there is now a CMA pattern of opposing US-centric or foreign deals with a slender UK nexus in dynamic global markets - especially where the CMA sees itself as hunting down a “killer acquisition”. For M&A partners, roller-dancing outdoors is hard enough, but the trick is to pull it off also in extreme UK weather conditions. Fred and Ginger sing about British vs. American English… so how to avoid the deciding word being a British pronunciation to call the whole thing off? It starts with good skating and accent coaches and careful planning.


Platypus was launched as a weekly internal UK merger control blog in the Linklaters London competition team. Spotting a gap in the market, it introduced the Phase 2 deal mortality rate as our most useful measure for tracking CMA merger control outcomes.


And if you have any comments on our content, we would love to hear them. You can send your feedback to our Platypus team here.

Our Platypus statistics were recently featured in an article by Bloomberg which looked at recent levels of intervention by the CMA.

Merger control is critical to the success of any M&A transaction. Linklaters’ truly global competition team works with clients to devise their global merger control strategy.

LinkingCompetition is our global competition blog, where you will find insights, commentary and news from our dedicated competition lawyers around the globe.

Welcome to the AFIG Media Hub, the home for on demand video and audio content from the Linklaters' Antitrust & Foreign Investment Group. On this page you can access webinars and podcasts in which competition experts from around the world discuss the key competition and regulatory issues of today.

The extent of the fallout from the health crisis on our economies and societies is still unknown. But so far its impact has been dramatic and the recovery unequal.

Explore our Linklaters Tech Insights page for the latest news, commentary and insights from our lawyers on all things tech.

This year the spotlight is firmly on competition policy and enforcement to answer many of today’s difficult questions – from rapid digitalisation and the importance of sustainability, to the evolving notions of “consumer welfare” and the benefits of free trade.

This series walks through the issues – from competitor collaborations to M&A and State aid – giving practical guidance on how to navigate the interplay between the growing expectations of governments and society and the consequences of breaching the competition rules.